Today was gorgeous.  Not a cloud in sight this afternoon, so I thought it’d be the perfect time to explore the Japanese Garden.  Jim and I had tried to go for a picnic two or three Sundays ago, but it was a national holiday, so the park doors were closed & locked.  Today, though, did not disappoint.

Walking in, it reminds me a little of Golden Gate Park – as there are tons of benches and lots of groups of young people huddled about on blankets or simply just sitting in the grass with friends.  Then you come to a path lined with large trees on both sides (photo).  It’s perfectly shady, calm, and just looks out of a photobook, to me.  Just a bit past those trees is the actual Japanese Garden.  It’s somewhat walled/fenced off from the rest of the park (which is also walled/fenced off from the rest of the city).  Inside there’s Pont Rouge (red bridge) that really pops against all the green, a koi pond (with SO many frogs), as well as a rock garden and carefully manicured trees/grasses, etc.

Just outside of the Japanese garden is another lake, right before you reach the canal.

What I didn’t take photos of was all the places for kids to play.  On the other side of the lake there’s a HUGE playground for children.  Then there was also what appeared to be a mini fairground of sorts on the other side of the park.  I’m not sure if this is a temporary or permanent thing, but it looked like they had bumper cars and a giant bounce house.

I can’t wait to go back with Jim, a picnic blanket, good book, some tasty food, and wine/cider.  I think we have a summer of picnics to look forward to! 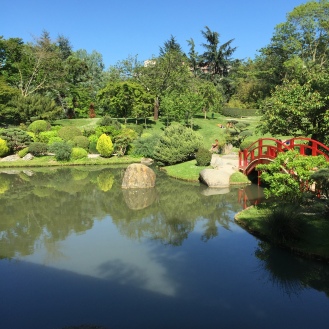 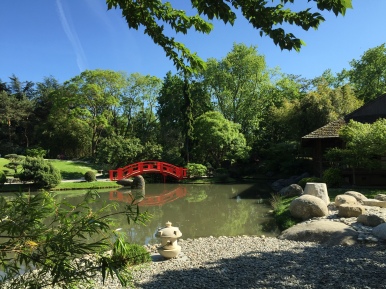 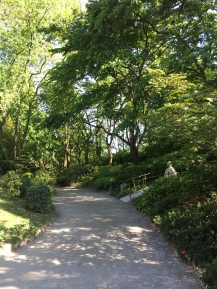