We ended our Scotland vacation in Edinburgh.  Lucky for us, the good weather fortune continued as we left Loch Lomond and were able to enjoy three days in Edinburgh without rain and at least one day of full sunshine.

Loch Lomond is a bit of a vacation spot for folks living in Glasgow (or so we read/were told), so it’s a quick drive to Glasgow as well as a pretty easy drive to Edinburgh.  With that said, we arrived in Edinburgh close to lunchtime where we dropped off our car at the airport and then made our way into the city to start exploring.

After a quick trip to the hotel we decided we’d start by exploring a little bit of Old Town with a walk down the Royal Mile and tour of Edinburgh Castle.  “Edinburgh Castle has played a pivotal role in Scottish history, both as a royal residence and as a military stronghold.  The castle last saw military action in 1745; from then until the 1920s it served as the British army’s main base in Scotland.”  It’s a pretty amazing structure, set at the end of Princes Street affording pretty outstanding views over the rest of the city.  As you enter you see statues of two men:  Robert the Bruce and William Wallace. 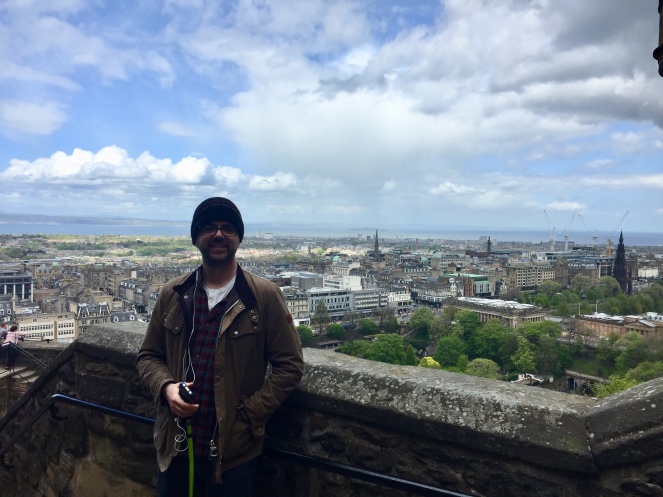 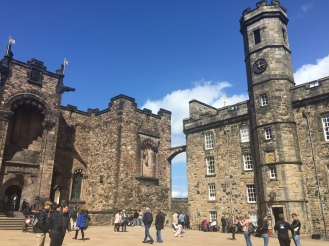 One of my favorite aspects involved the flags flying throughout the castle.  In the above photos you can see a little bit of both.  In the large photograph above you see an actual blue/white flag flying and in the photo to its right there are tiny metal flags at the each corner.  Those metal flags were really cool, as the metal was the white of the flag and the blue part of the flag was left exposed, to be filled in with a blue sky.

We went in all the buildings, but our favorite probably involved the Scottish National War Memorial (the building above where I’m mentioning the metal flags) as well as the Great Hall (photos below).  Unfortunately, photos weren’t allowed in the National War Memorial, but we found our favorite weapons in the Great Hall.  We both decided the best options were those in the photo with me, below. 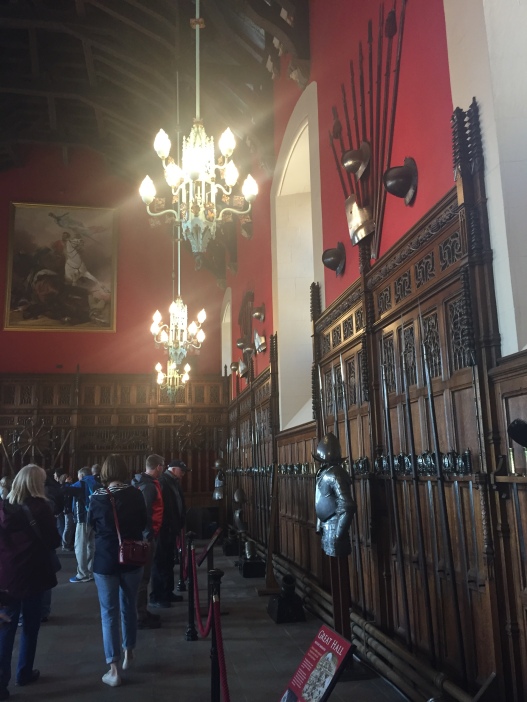 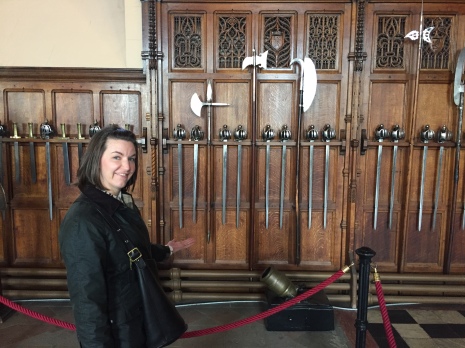 We were too late to catch the One O’Clock Gun, but we were able to enjoy the views from the Half-Moon & Forewall Battery, some of my favorites of the day. 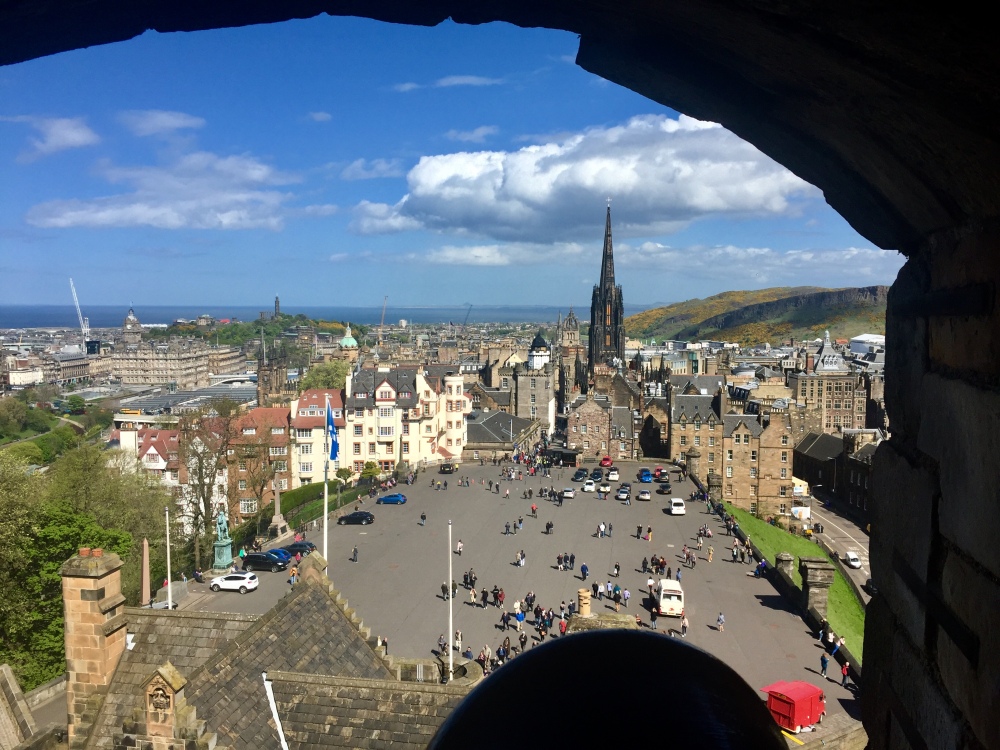 The audioguide had mentioned Georgian architecture in New Town, which was where all the new money had moved/lived in Edinburgh (it’s also the site of lots of shopping), so we climbed down the hill to find some impressive bagpipe playing in front of the National Gallery.  We wandered into and out of various Scottish souvenir shops (we wanted to buy a blanket), but decided we’d wait to buy anything until we were absolutely in love.

Surprised that the clouds were staying away, we decided to head over to Calton Hill, where we were promised some excellent views of the city and of Hollyrood Park.  Due to the time of day, I didn’t get a great cityscape photo (below), but I was able to capture a really fantastic one featuring the gorse, Holyrood Palace, as well as Holyrood Park and Arthur’s Seat (below). 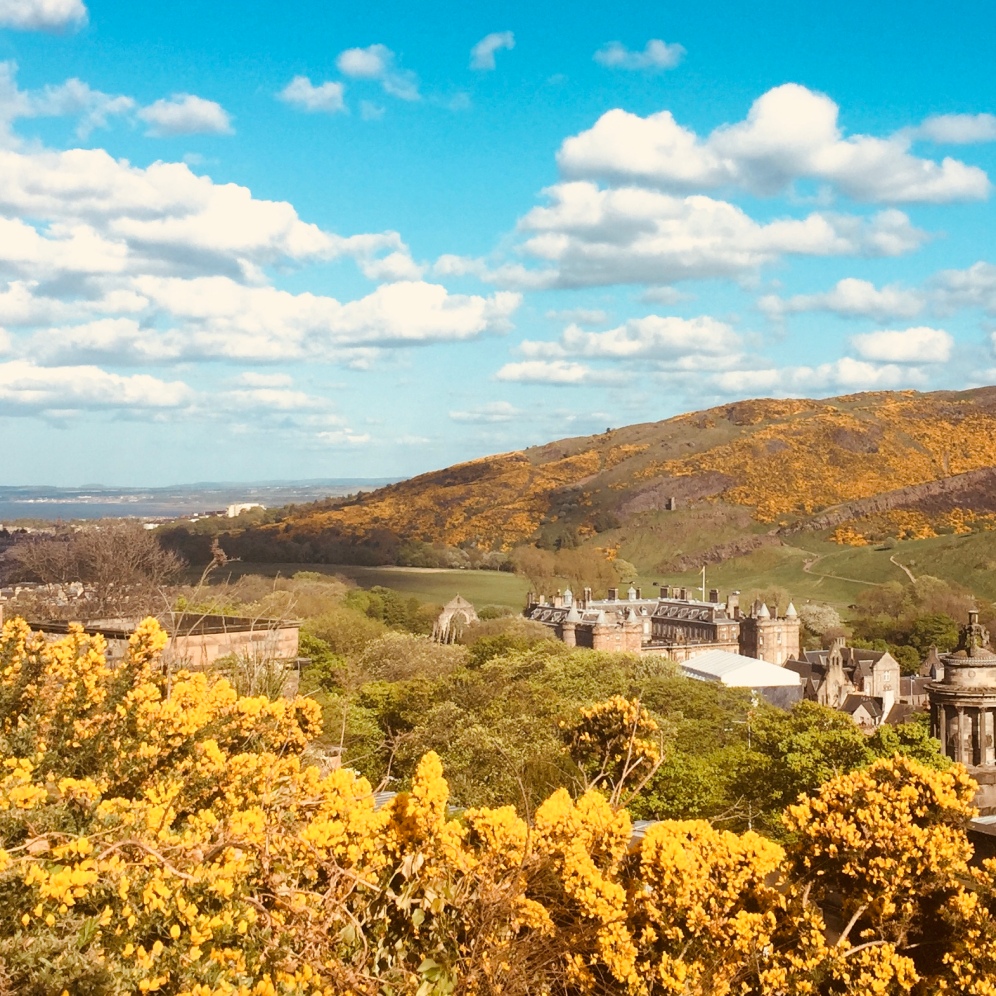 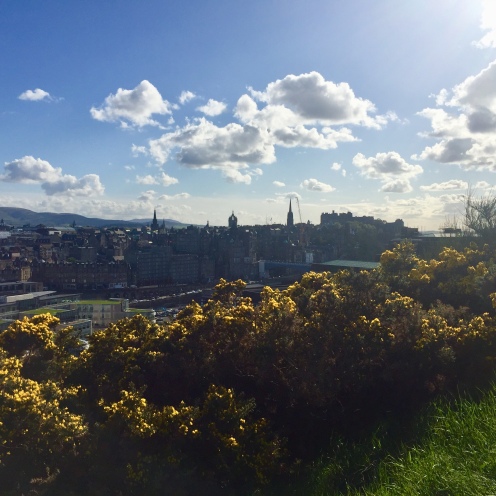 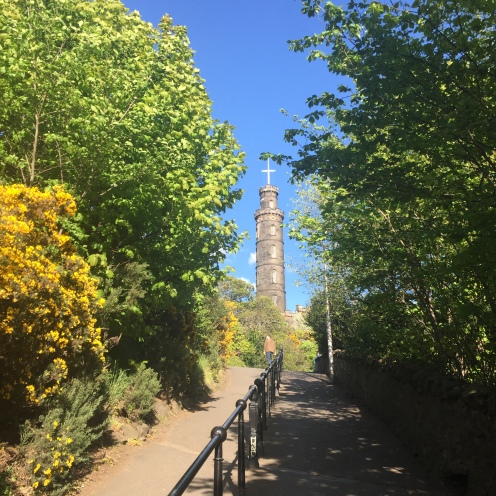 From there we decided to freshen up/take a breather before our dinner reservations at the Grain Store Restaurant.  We absolutely loved everything about this restaurant from the street it was on (photo below of Victoria Street) to the food we ate.  It was an absolutely delicious dinner full of local produce, game-y meats (my favorite), and a stellar wine selection.

The next day we planned for more, somewhat random exploration around the city.  As such, we continued our quest for a wool blanket and scarves while taking in as many parks and architecture as we could.  Our first stop took us to a tasty brunch at Urban Angel, down in New Town.  It’s a great spot (actually, all the places around it looked & smelled equally amazing) with your typical brunch fare.  We both ordered some variant of avocado toast with hot chocolate or coffee and fresh squeezed juices.  I was in breakfast heaven.

After lunch we decided to explore the Queens Street Gardens, only to find you cannot enter/explore that garden (or seemingly any garden in Edinburgh) without a key and permission from the city.  Wild. 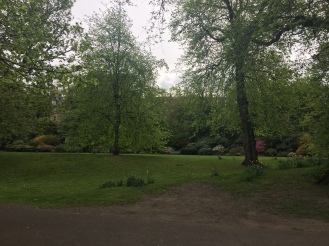 New Town is also supposed to be built after Georgian architecture, so we took the time to explore some of the Circuses and streets like Heriot Row (where we imagine the uber rich live), which didn’t disappoint and reminded me a little bit of Bath.

It was a little cloudy and we feared it might rain on us, so we opted to check out the Camera Obscura and World of Illusions back up in Old Town on Princes Street.  The tour is about two hours if you see everything and includes a camera obscura demonstration (which is pretty cool and highly recommended on a clear day) along with other five or six other floors filled with optical illusions and such.  Some of our favorites can be found below.  This is probably the only time I’ll ever be bigger than Jim! 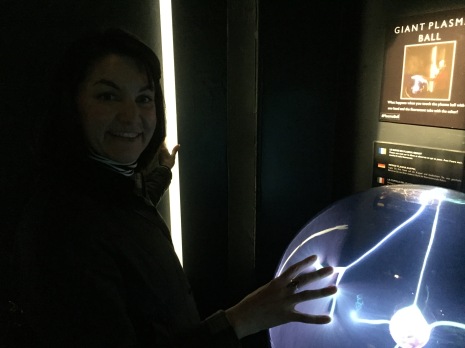 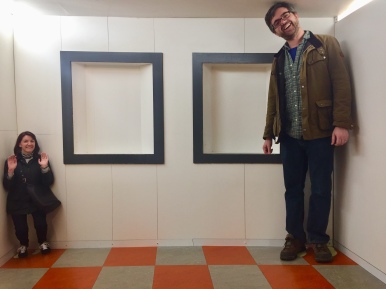 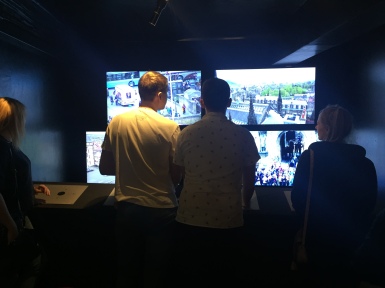 That night we had dinner reservations at a seafood restaurant – Ondine.  After reviewing the menu, I was pretty pumped to eat a little lobster (and it did not disappoint).  I saw they had lobster thermador (which neither I nor Jim had ever eaten before), so I jumped at the chance to order it.  It’s pretty delicious, but also maybe the richest thing I’ve ever eaten, ever.  Maybe get that for the table and order another fish dish for yourself.  After we rolled ourselves out of dinner, we decided to explore the city at night (and walk off the heaviness from our meal), wandering around Edinburgh Castle and out toward The Meadows before calling it a night.  It should also be mentioned our hotel introduced us to a delightfully tasty treat – kind of like a s’more but not hot.  I think I ate all of them that were available in our room.  Yum.

The next morning we got up early so we could hike up to Arthur’s Seat.  The weather forecast said it’d be sunny until noon, so we thought we’d beat the heat and potentially some other hikers/walkers (we did).  This might be my favorite thing that we did in Edinburgh as the walk there (we went down Canongate) was gorgeous and hardly a cloud in site in the Park and Arthur’s Seat (which may or may not be the site of the King Arthur’s tale).  It was the perfect day for a hike and we commented how great it’d be to plan a hike like this on a lazy Saturday or Sunday and just relax (we saw tons of folks napping & reading books up here).  Just stunning. 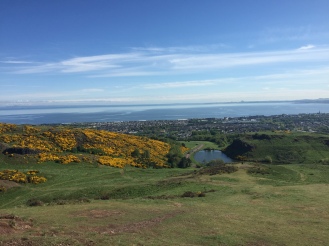 We strolled past Holyrood Palace (where the Queen stays when she’s in town) in the above and below right photos (below) as well as a view back at Holyrood Park (below, left), treating ourselves to a hamburger lunch before cleaning up and exploring a bit more (and eating a bit more ice-cream). 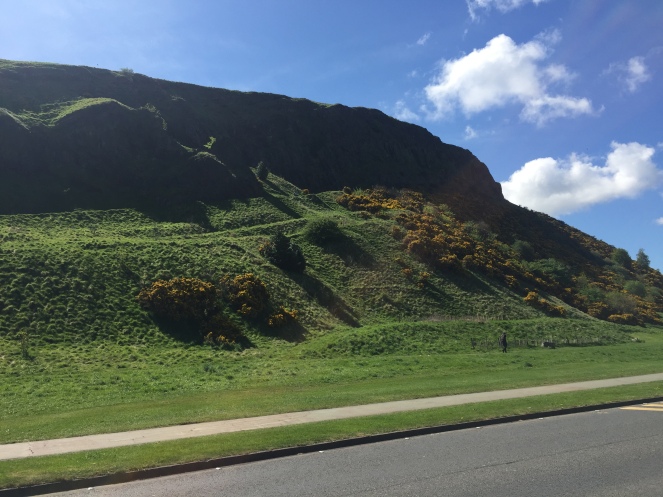 We decided to check out The Meadows, which seemed to be in the college area of Edinburgh and were delighted to find a cricket match in play (below).  There were tons of folks barbecuing, dancing, listening to music, and just enjoying the weather.  It felt so much like Golden Gate Park (or any park) in San Francisco.

Once the cricket match was over, we ran over to Dishoom (our favorite) for dinner where we ordered all our favorites and managed to still get in and out with time to catch our Edinburgh Ghost Tour back in Old Town.

The ghost tour was interesting as it provided a few above ground ghost stories (and gorgeous sunsets [below] as well as one of the only tours in Edinburgh of the underground vaults of South Bridge.  This was interesting to us because we learned that we were staying in the old “Little Ireland” or slum city of the old days AND we found out these vaults were used by body snatchers, as well.  Pretty wild, interesting, and a great way to end our time in Edinburgh.

When we planned the trip we weren’t expecting to love Edinburgh, but in the end it was our favorite destination, one we’d definitely revisit and highly recommend as it’s got a little bit of everything:  good food, nice people, city exploration, castles, and hiking!