When we were thinking about moving to Toulouse, I remember looking through Google Images to get an idea of where we’d be moving.  I saw many photos at night with a large ferris wheel.  I immediately though, “How amazing…they have a ferris wheel like London and Vienna.”  Imagine the surprise/disappointment upon my first trip last December with no ferris wheel in sight.

I then found myself googling, “Toulouse Ferris Wheel” hoping to see if it was a seasonal thing.  Nothing.  There was nothing on the internet aside from beautiful photos of the ferris wheel I could not see or ride.  What’s more, many of the photos seemed to be from 2014 or before.  I decided the ferris wheel was something that no longer existed.

That is until we were flying over Toulouse on our trip back from Cleveland.  I remember looking down and seeing La Grande Roue along the Garonne, in front of La Grave.  It’s highly possible I bounced a little in my seat as I elbowed Jim in delight pointing out the window, “The ferris wheel does exist!!  They must’ve put it up while we were gone!”

We were home for a week when we finally crossed the bridge to ride the ferris wheel, and it was delightful.  Not only does it make for some pretty photos, but it also affords some great views of Toulouse, even when it’s pitch black outside.  The city has a little more energy at night with the extra lights visible.  You can see folks picnicing/lounging along the river, setting up shop at the “beer garden” and enjoying music.  Only thing that would’ve been better was if I could’ve found that accordion player… 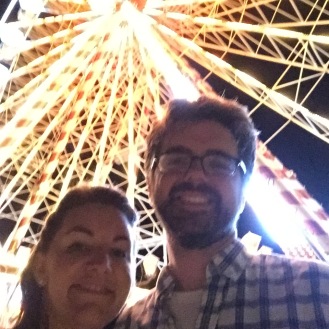 Once we arrived at La Grande Roue (or The Big Wheel, as it is translated), I discovered it IS seasonal and only around in late July and throughout August.  I’d like to return and take it for a spin during the day (I bet the views really are pretty amazing during the day), but not sure if we’ll have a chance.  Maybe I’ll go tomorrow afternoon…

All together, I think tickets were three or four euro for maybe a 10-15 minute ride.  Not too bad, in my opinion.  The line wasn’t too long, either.

Just what I needed.  A little piece of carnival summer here in Toulouse.