We flew north last weekend to meet Jim’s mom (Gail) and her friend (Carolyn) in Paris for the weekend.  It was our first time, ever, in Paris, and we agreed we completely get the appeal.  It’s a charming city with absolutely gorgeous architecture.  We’re planning to go back in October for our anniversary, so it was extra nice to get a lay of the land and knock out a few tourist attractions now.

We arrived on Friday night and took Le Bus Direct, which cost about 12 euro/person and took maybe 25 minutes from pickup to drop-off into the city.  Super easy.  Fully recommend.  Once we checked into our hotel, we oriented ourselves and decided to tackle the Paris metro for our first trip to a cocktail bar.  (If you’re visiting Paris, definitely take the metro.  I bet in the course of the weekend we hopped on the metro at least 10-12 times, maybe more.  It’s cheap (about 2 Euro/ride), easy to navigate, and there are stops and lines intersecting all over the place.)

We arrived at Prescription Cocktail Club and were greeted with, “Comment allez-vous” which means, “How are you?”  Now, this might not seem like an odd thing to hear, but we’ve been living in France for five months and this is the first time we’ve encountered anyone uttering this phrase to us.  In Toulouse (and Bordeaux, Antibes, Carcassonne, Nice) you’re greeted with, “Ça va?”  The direct translation for that is, “How’s it going?”  I utter this phrase multiple times a day.  Jim and I started to wonder if Parisian French really is quite different from everywhere else French, maybe a little more formal than elsewhere.  Interesting, for sure.

We found a seat upstairs and each ordered two signature cocktail drinks from the menu.  While Prescription Cocktail Club is rated as one of the best cocktail bars in Paris, it probably doesn’t crack my top 20, and it is no Fat Cat.  Both of my drinks were better than Jim’s.  I believe I ordered the Tomato Lady or Lady Tomato (mezcal, celery bitters, tomato syrup, lime juice, etc.) and one with armagnac & sake.  They were both tasty and something I’d probably order again.  However, Jim ordered two that were more bourbon forward and both tasted watery and overworked.  So, I’d say this place (ultimately) was a little hit and miss.  I’m starting to think French cocktail bars really shine with rum, gin, and vodka drinks and/or sweet moreso than the brown liquors or dry drinks (which we prefer).  Outside of the drinks, it was a nice speak-easy style bar, comfortable couches, two levels with a friendly (and attentive) wait staff.

After our drinks, we decided to walk down Le Seine from the bar to the Eiffel Tower for a late night shot with the tower lit up.  If you haven’t made this walk, we recommend it – it was quiet with not too many people on the streets and all the buildings twinkled in the most lovely/romantic way.  We wandered around until a little past 1am, which coincidentally is also when they shut off the lights of the Eiffel Tower.  We arrived there around 1:15am to find it completely black.  After some research, the tower twinkles for five minutes at the top of every hour (once it’s dark) and then continues with the lights until 1am, when it twinkles for the last time.  Rats.

Above in the first photo, you’ll see the Louvre.  Jim and I had been wondering where the French palace was in Paris and were intrigued to find out the Louvre WAS the Parisian palace for French aristocracy.  That is a HUGE palace!  What’s even more interesting is I believe they built Versailles because the Paris palace was “cramped.”  Wow.  Can’t wait to see Versailles and go inside the Louvre.  There’s also a photo of what we imagine is the hip spot for college students to hang out along the Seine – there were SO many bars on boats along the river like the fourth photo above.

The next morning, Gail and Carolyn were arriving from the US, so we set out to grab some pastries and then start our Parisian weekend.  I walked around the corner from our hotel and bought a number of croissants and assorted pastries from Maison Privat.  No joke, this might’ve been the best croissant I’ve ever had.  Maybe I was hungry, but it was really tasty.  I think Paris has converted me to a croissant eater.

One of Jim’s coworkers had mentioned going to Tour Montparnasse, which he said offers superior views to the top of the Eiffel Tower.  While I haven’t been up to the top of the Eiffel Tower, I can’t imagine it supplies better views than Montparnasse, especially since you can get a view of the Eiffel Tower!  Essentially, it’s a standard, tall office building next to the Montparnasse train station with a 360 observation deck at the top.  It reminded me a lot of the Sears/Willis Tower in Chicago, the Prudential Center in Boston, the Empire State building in NYC, and even the Space Needle in Seattle.  It also felt like a great place to visit at the beginning of the trip, as you can really get an idea of where things are laid out as well as a little (preliminary) history about various buildings and places.  Really recommend on a clear day. 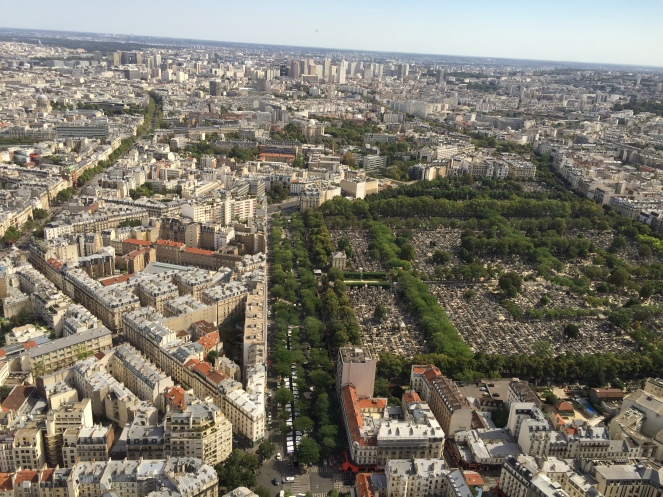 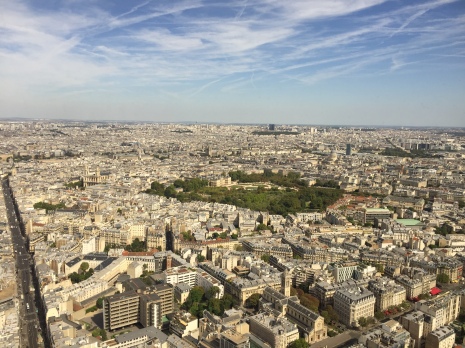 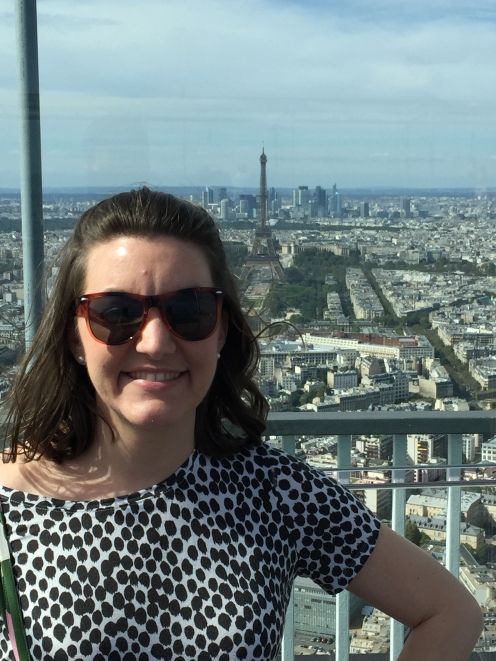 That night we took a boat tour on the Seine, which was equally delightful/wonderful.  We had a few hiccups regarding where our boat picked up (as did a few other tourists, we noticed), but once we got on the boat, it was an hour or so of nothing but beauty and interesting sights/trivia. 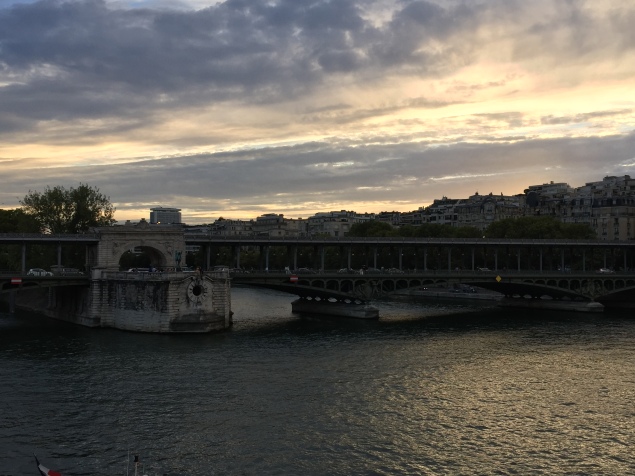 We saw so many gorgeous buildings, bridges, churches, hospitals, museums.  There’s something really magical about seeing a city like this at night.  Something that struck me was just how vibrant the city was around the Seine.  There was a whole area dedicated to various types of dance along with almost the entire bank covered with late night picnics and drinking with friends.  I’m not sure I’ve ever seen so many people outside enjoying the company of others with a good drink/food and no other entertainment than themselves.  I loved it. 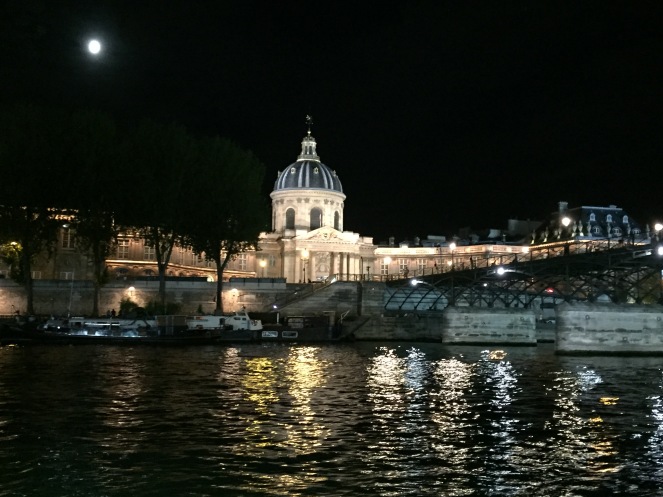 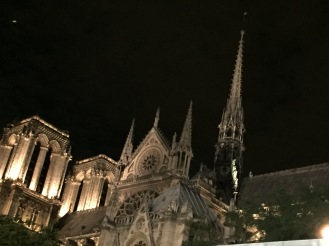 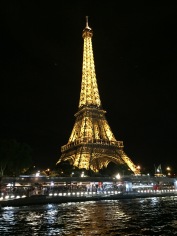 The next morning we had decided to go to Notre Dame and wander about in the Latin Quarter.  We started with a trip to Loulou for breakfast.  This place was very tasty.  Jim, Gail, and Carolyn all ordered French toast or pain perdu brioché while I ordered eggs benedict.  Both were really tasty, but these were maybe the best poached eggs I’ve ever had, and maybe the first time I’ve actually enjoyed/liked hollandaise sauce.  I think I could get used to that.  If anyone has any egg poaching tips – I’m all ears, as I’d love to start making this at home for myself.

Following breakfast, we walked over to Cathédrale Notre-Dame de Paris for their 11:30am international mass.  Let me just start by saying, woah.  This is one insanely phenomenal cathedral.  It took more than 800 years to complete (wikipedia says two centuries), and it has more than two million visitors a year, making it the most visited monument in Paris. 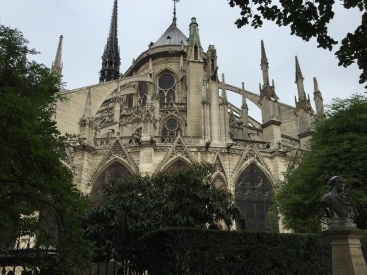 Above are some photos of the exterior – you really cannot see the detail of the church as much as when you’re there.  Honestly, it looks like it should’ve taken four centuries to complete.  Gail pointed out an interesting tidbit:  in the largest photo there are kings around the doors.  Some of the kings no longer have heads and are holding said heads in their hands (hello guillotine). 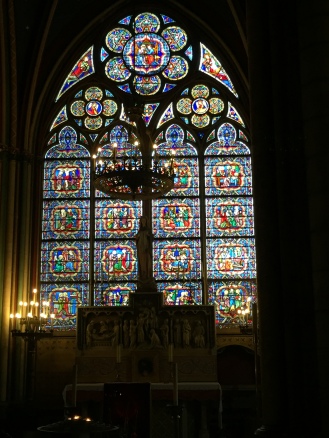 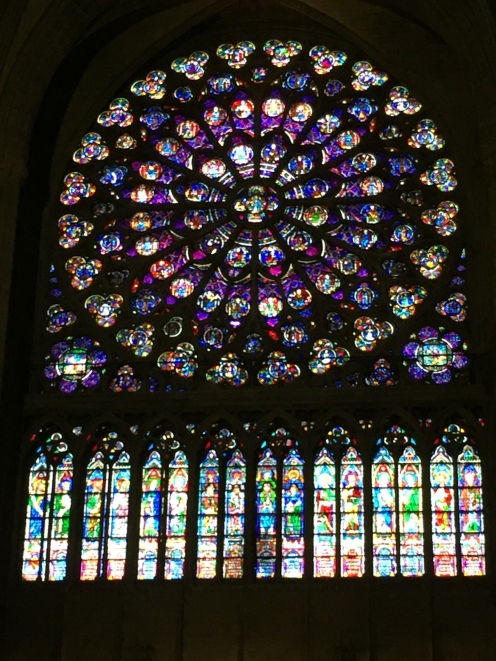 After the cathedral, we made our way to Pont Neuf and then into the Latin Quarter where we ate some tasty ice cream (Berthillon), saw some beautiful buildings/monuments, and probably heard the most English in France (area had a lot of tourists).  But, this is also when I was introduced to one of my favorite Parisian things bouquinistes – book/paperie stalls along the Seine.  When we walked along the river on our first night, we saw the boxes and wondered what they were for.  All along the river there are book and poster/print sellers.  I LOVE this.  LOVE.  It’s a delightfully clever idea and takes something I love to see (books in bookshelves) and props them up with the Seine as the background.  Why don’t all cities do something similar?  I cannot imagine Paris without the Seine.  I just cannot. 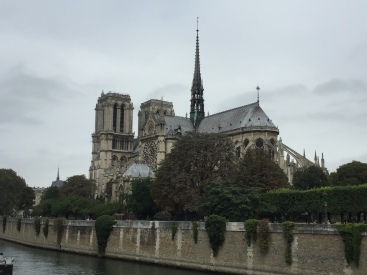 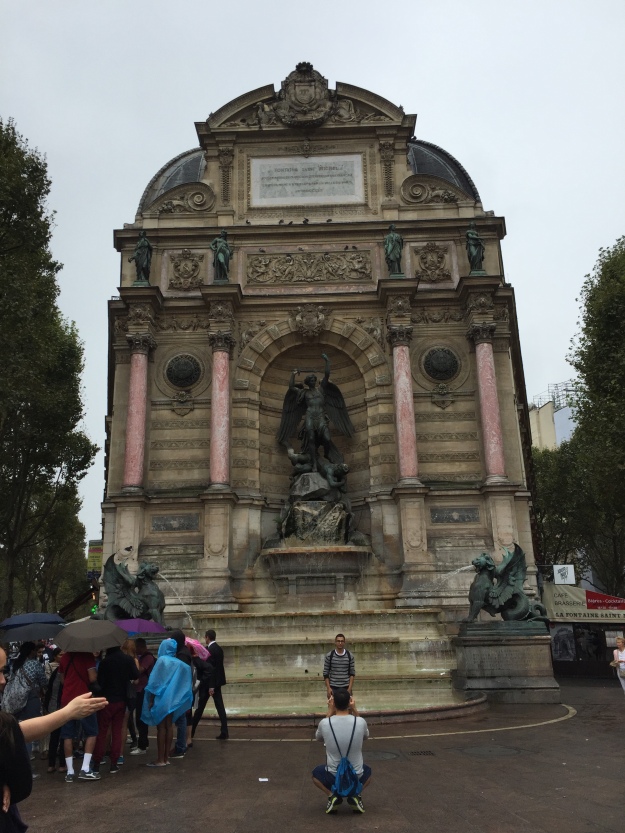 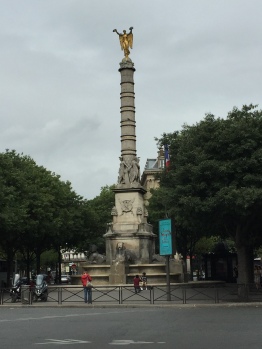 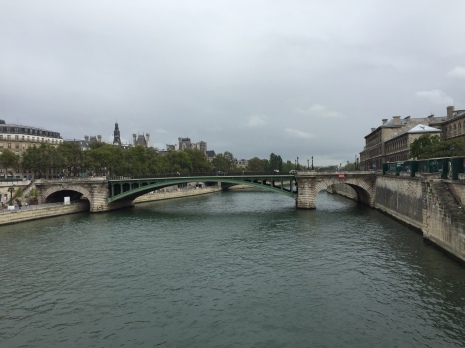 We decided to end our trip with a visit to the Arc de Triomphe.  I didn’t realize you could go up to the top (we didn’t) or that it was known to be the Tomb of the Unknown Soldier from WW1.  It’s a pretty area, as well, though busy for sure.

We also sampled some of the best macarons I’ve ever had at Ladurée.  We tried the chocolate (maybe my favorite), mint, salted caramel (their best-seller), pistachio, orange blossom (Jim’s favorite), and coconut (maybe my favorite).  I have to admit, I did not really like macarons until this trip.  I’d eat them, but they never really tasted like anything or had any real body.  These, however, were amazing.  AMAZING.  I think, now, I might have to really start trying these in each French city and/or making them at home.  Mmm…

Can’t think of a better way to see a lovely city or with better company.  Accepting all recommendations for things to do/see when we return in October.  Obviously we’ll be going to some museums, but I think I’d also like to do a cinema/movie tour (cheesy, I know, but I just kept thinking about Charade while we were walking around), go out to Cimetiere de Pere Lachaise, and go to Versailles.