A few Sundays ago, Jim and I were invited to our first, ever, rugby match:  Stade Toulouse vs. London Wasps.  For a little background, rugby is a big deal in Toulouse.  A Big Deal.  In fact, it’s the most popular sport, by far.  And with good reason.  Stade Toulouse is the most successful rugby club in Europe, having won the Heineken Cup four times (1996, 2003, 2005, and 2010) and also having won 19 French Championship titles.  As you can probably imagine, I liken cheering them on to being a UK basketball fan – it’s a real no-brainer when you live there.

Jim’s Toulousain coworkers had organized the afternoon game.  Days before, at work, Pierre had given the Americans a little Rugby 101.  I had asked Jim if I could be teleconferenced in, but he just laughed at me.  As such, I recommend this site for your own rugby 101, as it’s pretty helpful in understanding what you’re watching as you’re watching it.

We met up with various French and American coworkers at the Jean-Jaures metro station and started our trip to Stade Ernest-Wallon, which is not terribly far from the airport out in Blagnac (you can see it from the interstate on your way to/from the airport), but does not have a direct metro stop.  I believe we took a shuttle to the stadium on the way there and walked to the closest metro station on the way back (about a 20-25 minute walk).

From the photo above you’ll notice Stade Toulouse’s colors are red, black, and white (my favorite colors).  Pierre (the organizer) brought along some face paint, and almost everyone participated (I did not).  I’m convinced Pierre is a bit of a mayor of Toulouse, as he seemed to know nearly everyone we passed as we navigated through the stadium.  I relayed how I had wished to be conferenced in and he laughed and began to fill me in on some important rules/things I’d need to know while watching the game.

One of those things concerned team positions and jerseys.  A team consists of 15 players and the jersey number is associated with position.  1-8 are the “big guys” while 9-15 are the small, fast, “smart guys.”  Any numbers you see above 15 are substitutions (which I later learned once you’ve been substituted out, there’s no going back in), which also correspond to various positions/numbers.

Another concerned general play – that a player can only pass the ball to someone behind him.  This is quite the interesting sight to see on a field as it is counter to nearly every American sport I grew up watching (mostly soccer), as the goal is to advance closer and closer to the goal by moving forward and kicking/throwing forward.

For others, I found The Princeton Athletic Club Rugby site, explained what was going on below perfectly, “Scrum: A set piece formed by the front eight players of each team. The ball is thrown into the middle of the group and each team pushes against the other team’s assembled eight men to contest for possession of the ball. Scrums restart play after certain minor infractions. The scrum ends when one team gains possession of the ball and moves down the field.” 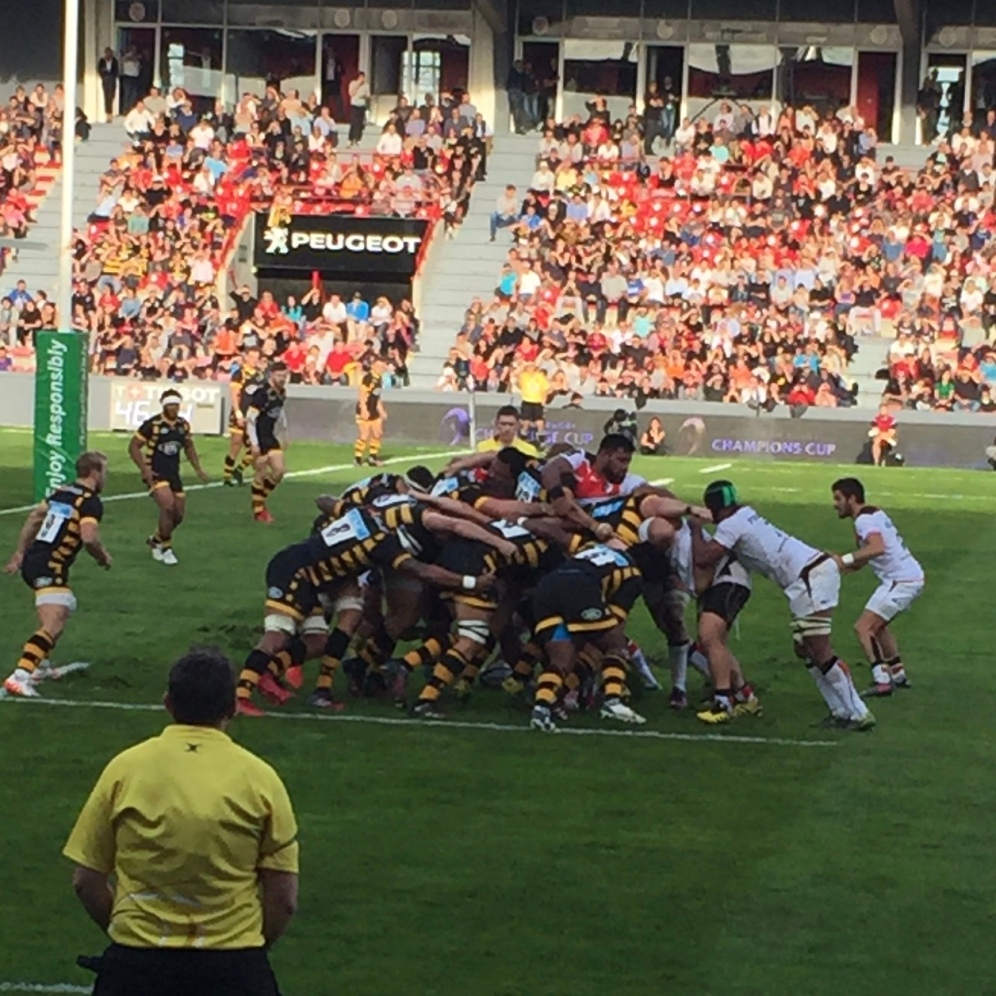 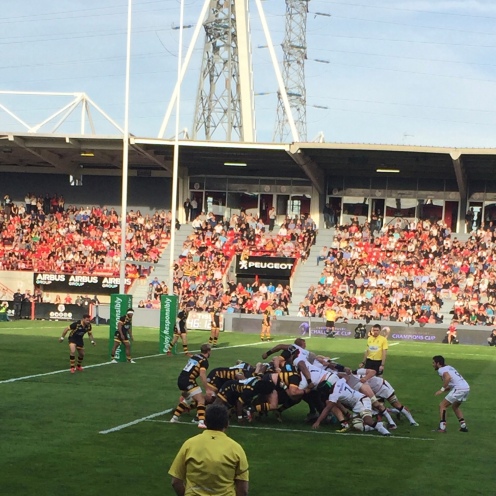 Above, you’ll see photos of three different scrums with the two teams of players 1-8 attempting to get the ball with the other players 9-15 elsewhere on the field.  Now, during the first half of the match, a lot of the action was down at the other end of the field (Toulouse was attempting to score) and there was scrum after scrum.  It would start then be broken up then start again with lots of displeasure and booing from the Toulousains.  At halftime, we learned the Wasps were intentionally not allowing the scrums to go off as usual, in an attempt to keep Stade Toulouse from scoring.  “Ah-ha!” we said.

We also saw a number of examples of a “ruck” and a “maul.”  Again, referencing the Princeton Athletic Club Rugby site, “Ruck: One or more players from each team, who are on their feet and in contact, close around the ball on the ground. Once a ruck has been formed, players can’t use their hands to get the ball, only their feet. A ruck ends when the ball emerges from the ruck or when a scrum is ordered by the referee.” and a “Maul: One or more players from each team on their feet and in physical contact closing around a player who is carrying the ball. A maul ends when the ball is on the ground, a ruck, or the ball or a player carrying it emerges from the maul or when a scrummage is ordered by the referee.”

My favorite, though, was the lineout.  Referenced here, “Lineout: Both teams line up opposite each other (similar to a jump ball in basketball), but one team then throws the ball down the middle of the tunnel. Line-outs restart play after the ball, or a player carrying it, has gone out of bounds.”  You can see an example of this one below. 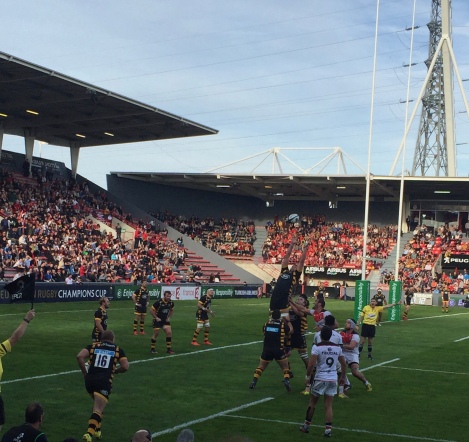 Now, all of this is great and good knowledge (and I’d say super necessary if you go to a match), but you also have to understand the scoring.  The goal of a rugby match is to score the most points.  There are four ways you can score points:  (1) a “try”, (2) a penalty kick, (3) a conversion kick, or (4) a dropped goal.

The “try” is the most lucrative, as it is worth five points and is followed by a conversion kick (worth two points) through the goal posts.  This most reminded me of American football, but one difference is the conversion kick has to be kicked from the the spot where the ball was grounded in the try.  I don’t think we saw anyone miss a conversion kick during the match.

A penalty kick is taking for various penalties and is worth three points.  We saw a couple penalty kicks.  Another is the dropped goal.  This happens when a player drops the ball on the ground and then kicks it just as it bounces (worth 3 points).  We didn’t (I don’t think) see any of those, but it sounds pretty cool.

Unfortunately, the match ended in a draw (tie).  But, I’m pretty pumped/interested in attending a few more matches, cheering on our new home team, and learning a bit more regarding what’s happening as it’s happening.

Here’s to many more matches in our near future!