We’d had a long day, waking up in Mont-Saint-Michel and spending the afternoon at the D-Day beaches, so we figured what better way to spend our evening than sipping wine, slurping oysters, and indulging in some fine calvados, aged 30 years.

I’d heard about Honfleur for the first time from my old boss (Steve), who had recommended we stay there if we head up to Normandy (along with Mont-Saint-Michel).   He recommended moules & frites for lunch & local cheese and a baguette on the patio for dinner.  Definitely a man with an interest in the good life.

After we settled into our hotel, we ventured out to explore the little town so beloved by painters like Monet, Cezanne, and Boudin.  Our first stop was right outside our hotel – Saint Catherine’s Church (below).  I wasn’t able to get a good photo as it was pretty overcast, but it resonated with me and stuck out in my mind so much so that we recognized a painting of that very church by Cezanne when we were touring Monet’s house in Giverny.  There’s something really fun about seeing real-life places that were painted.  It feels like you’re part of an exclusive club. 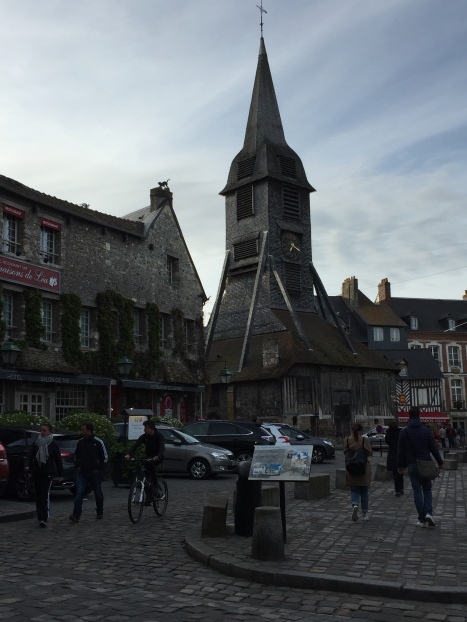 Our second stop, took us to the #1 attraction in Honfleur – Le Vieux Bassin.  Below you’ll see photos from each side.  Essentially, it’s a little harbor that’s nestled with cafes/restaurants on each side.  I want to say we started exploring around 7 or 7:30pm, and all the restaurants were packed with folks enjoying themselves – all you could hear was the infectious clinking of wine glasses and the chatter of happy people. 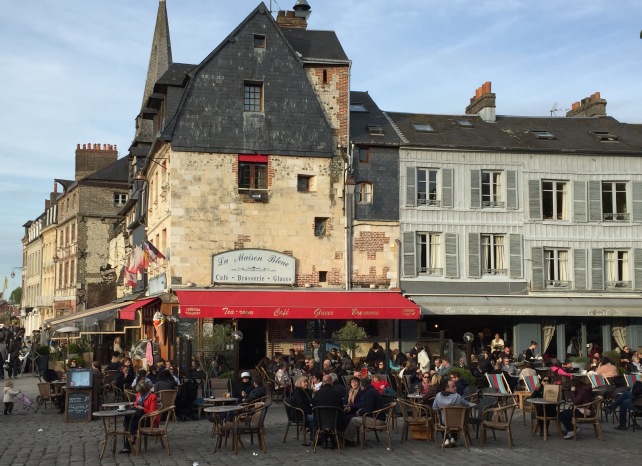 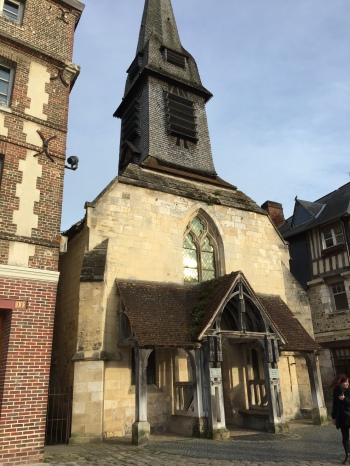 By this time we were ready to grab something to eat.  Jim did a little internet consulting and found a wine bar called Chez DD.  This was the perfect non-tourist/neighborhood spot.  More than anything else, after our trip to Normandy, I cannot speak more highly of eating off the beaten/tourist path.  The wait staff here was incredibly kind/helpful and perfectly French.  We felt at home, immediately.

We walked through the door to find some regulars enjoying oysters (the owner later sat down and drank a glass of red with them) and immediately knew this was the perfect spot for us.  We followed suit and ordered a dozen oysters with two glasses of champagne (we’re on vacation, after all).  Jim had a “melange” of whites while mine was based off of a Chardonnay (mine was a little better).  Following that, we opted for a charcuterie plate and a cheese plate with some glasses of red.  Jim had a Chinon and Yin Yang, while I had a Yin Yang and A Mon Pere.  There are so many things to say about all of the food we had – the oysters were fresh, salty, and perfect with the champagne.  The cheeses were a mix of goat and brebis (sheep), all sliced super thin (think deli meat slicer thin), same as the ham and sausages.  Jim joked that we should look into buying a meat slicer for our dream kitchen.  I think he might be onto something.

It was the perfect amount of food and just the right amount of local yumminess.  The red wines were also quite tasty, and they were more than happy to let us try the wines before ordering a full glass (this is a first for us in France…and we drink a lot of wine).  Jim’s favorite ended up being the Yin Yang and mine was probably the A mon pere.  If you see any of these, we’d recommend picking up a bottle or two.  If we hadn’t had to fly, we would’ve purchased a few to take home with us/add to our growing cellar.

But, the best thing we tried was the calvados, which is locally produced apple brandy.  As a huge fan of armagnac (a southwestern France specialty), I had been looking forward to trying calvados in Normandy.  We had our first taste in our dessert at Mont-Saint-Michel. It was Calvados poured over apple sorbet.  This was not my favorite.  However, our neighbor (his father is from Normandy), told us it’s very popular to add calvados into applesauce.  That might be better, we thought.  But, aged and on its own it is quite tasty in its own right.  It’s sweet with a little bit of oak and smoke – a perfect after dinner digestif.  However, we both voted, and decided we (still) prefer armagnac.  Point for the south.

After dinner we took an evening stroll back through the bassin and down through a few tiny streets with a stop off for some tiramisu ice-cream on the way.  The breeze was cool, restaurants were still packed, and the little town was still brimming with excitement and and energy.

If we could plan the trip over again – we’d allow ourselves more time in Honfleur, as I think we could really eat & drink our way down every alley.  I imagine it is an amazing summertime haven.

Nothing but bonheur in Honfleur.