Wine used to give me headaches when I drank it.  So, I had always considered myself more of a beer or cocktail than wine drinker.  Maybe it’s my German/Irish roots or maybe it was the proximity to amazing beers on the east coast.  But it wasn’t until I moved to the Bay area (aka the land of the IPA) that I started to drink and explore wine (as they say…when in Rome…do as the Romans do).  I discovered what grapes I like, what areas were my favorite, and even found my favorite wineries thanks to a few Dry Creek excursions with Andrew and Sophia (Denier-Handal).  As folks would come visit, we’d go out to Napa or Sonoma.  Once we even had a fancy barrel tour (I tasted a $300 bottle of wine, and believe me when I say it really was THAT MUCH BETTER).  In fact, as we were preparing for our move to France, we found ourselves with quite the conundrum of how to deplete our wine collection (we saved some, gave a lot away, and drank amazing bottles for months).  Wine was my new go-to drink with dinner.  Imagine our excitement when moving to France where you can buy an AMAZING bottle of wine for 3-5€.

We’ve now been in Toulouse for a little over a year.  I won’t say we’ve completely figured out wine in France (we have not), but it’s been an interesting dinnertime adventure.  Unlike in the US, few bottles in France tell you the grape varietal.  Instead, the wine bears the name of the winery and/or the region where it was made.  As an ex-pat, this can be tricky when making your first purchases.  So far, we’ve discovered there are areas that make wines we like and wines we don’t.  But, it’s only helpful if you’ve tried wine from that winery/area before (we’ve found it’s best when in doubt to just pick up a bottle with a gold, silver, or bronze medal).  Otherwise, it’s sort of a crapshoot.  Unless you chat with someone.  It’s easy to see why France has such a chatty culture when it comes to shopping…as most folks will tell a shopkeeper/sommelier what he/she is going to be eating and they will be able to make the recommendation for the ideal wine pairing (and they’re ALWAYS on the money with their pairings).  What’s interesting is that this also applies when doing wine tastings in France, for better or worse.  Interested to learn a little more and do some regional tastings, Alice and I felt it was necessary to drive the Côtes du Rhône Wine Trail before closing out our Roman Ruins & Lavender tour and heading back to Toulouse.

Our day began at Pont du Gard, then we drove east to see the villages and wineries along the Côtes du Rhône Wine Road.  Our old friend Rick Steves had recommended a driving tour with stops at Séguret, Domaine de Mourchon Winery, Crestet, Domaine de Coyeux Winery, and Gigondas.

We started in Gigondas, as we were set to arrive close to lunchtime.  The drive was really quite beautiful (even if cluttered with more speed bumps than I’ve ever seen anywhere else in the world).  The drive from the main road into Gigondas was lined with Cyprus trees (looked so much like Tuscany & Napa/Sonoma) with grape vines and olive trees as far as the eye could see.  What was even more stunning (for us) was the sound you could hear as we drove – the sound of locusts/cicadas (we think) aka the universal call of summer.  It was a hot day, but the trees and the cicadas together made it feel like a different place, well outside of big city limits.  It made it feel like an adventure. 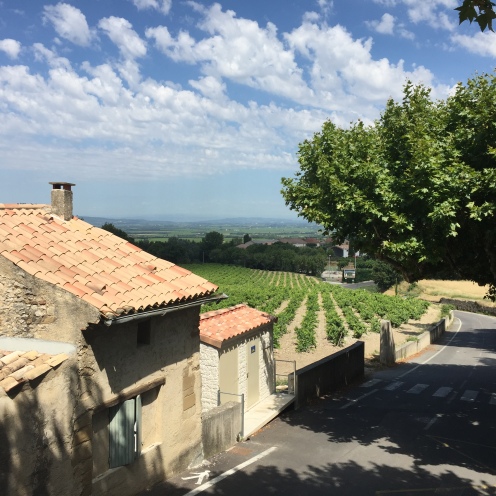 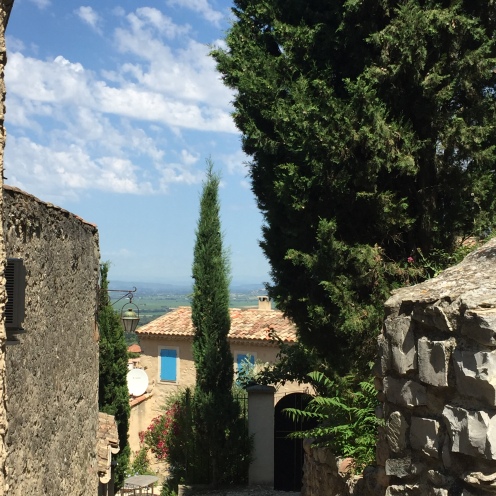 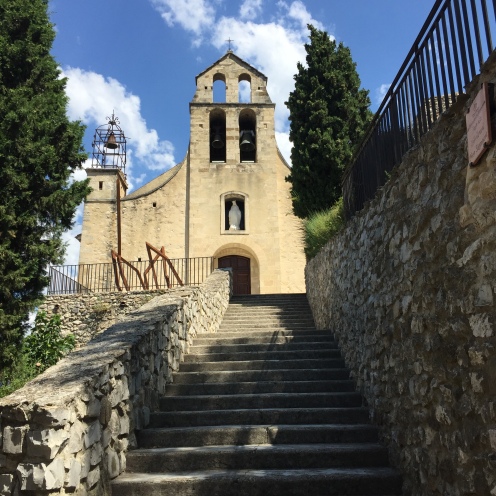 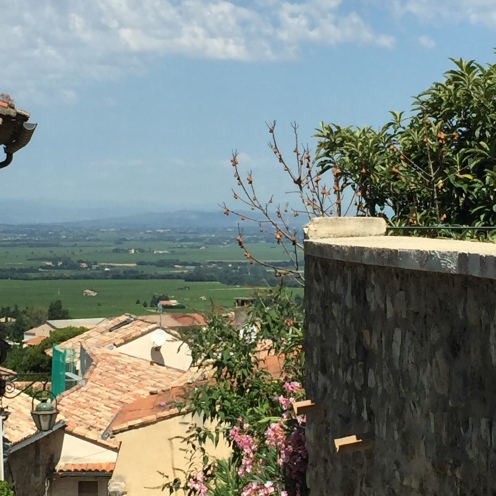 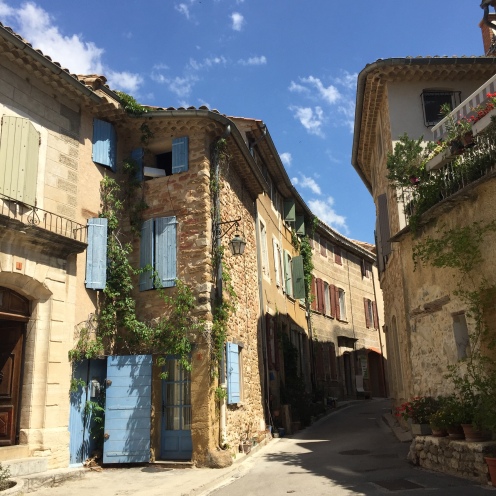 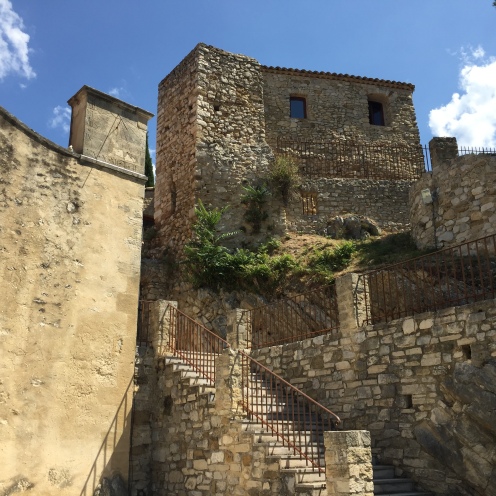 Unfortunately, the tasting rooms were all closing from 12-2pm for lunch.  As such, we explored the town a little and then settled into a little tea room for lunch.  If you’re in Gigondas, I recommend walking up the hill to the church, as you’ll be rewarded with amazing views of the countryside (above and below). 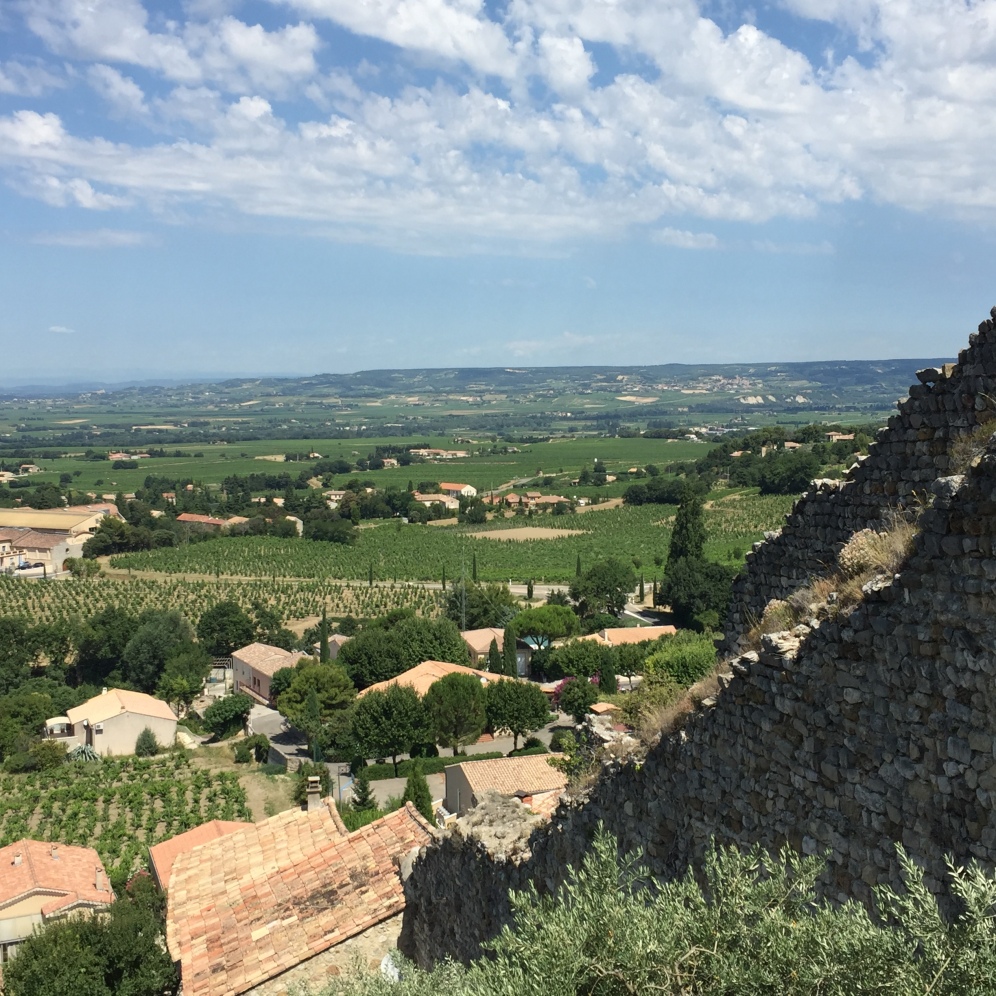 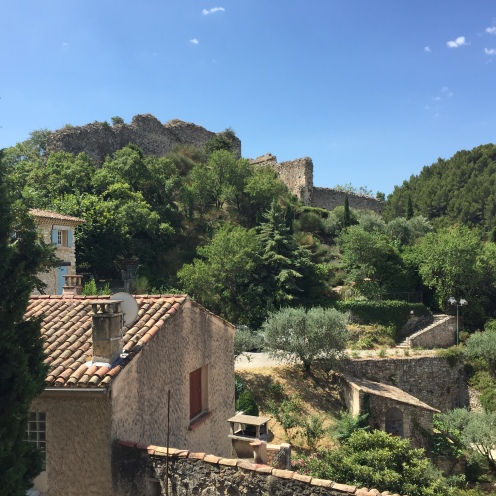 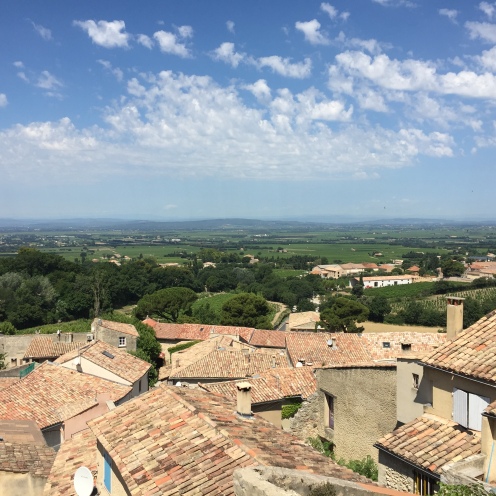 After lunch, we hopped back in the car and started the drive around the loop with the intention of stopping at Séguret and ultimately Domaine de Mourchon Winery.  We drove through Séguret (pretty), then made our way up a one lane path toward the Mourchon Winery.  We found a sign for the winery, but then were the ONLY people there.  Unsure if it was a home or the winery, we continued down the road to another building (which we think was definitely a home).  A little discouraged, we drove back down the mountain and continued on our drive toward Crestet.  Sadly, our first winery experience seemed to ring true at the next winery, and we decided, instead, we’d just make the loop and drive back to Gigondas where we could try some wines in the large tasting rooms.

As such, about two hours or so later, we made our way back to Gigondas and Le Caveau de Gigondas.  In the US you’re often met with a defined set of wines available to taste or a sheet which describes the wines, what to eat them with, varietals, etc.  Here there were over 50 wines you could try, but each only had the name of the winery, the year bottled, and the price.  Then you’re asked, what would you like to try.  Honestly, I want to try them all, but that is not very practical.  But, it is rather difficult to look at a list of 50 and say, “let’s try this one.”  Talk about overwhelming.  On the list there were only maybe 10 rosés to choose from (everything else was red).  So, we asked to try a rosé.  This is where things got interesting.  She asked us if we liked fruity or dry, one of my most hated questions…as I frankly have no idea if I like fruity or dry, I just know a wine that I like when I drink it.  We said we weren’t sure, so she picked out one and said, If you like this, it’ll tell me what to pour you each next (I don’t remember if it was fruity or dry).  We both liked the first pour and she selected a second (which I think was fruitier).  I thought it was also good, Alice said it tasted of vinegar.  Then she produced a third, which ended up being the rosé we each purchased.  Now I was feeling more comfortable and I asked to try a red to which she responded, “You’ll have to tell me which one, as there are so many and all are different.”  So, I said, “What type of grapes are in the wine.”  She responded, “They’re all a melange of grenache.”  In my head:  “Crap.  I don’t know if I like that or what that tastes like in relation to other wines I like.”  Out loud I said, “Oh, ok, maybe one that is the most popular.”  She produced a few tiny bottles for us to try.  The first was very mineral-y (not my favorite), the second a bit fruitier, and the third was fantastic (I bought 2 bottles…it was also a bronze medal winner).

I think, in France, what I really want is like a beer festival in the US where you buy a cup and then lots of breweries set up kegs where you can try tasters of whatever you want.  Then I need to take copious notes on what I tried and where it was from.  I might also need to invest in some sort of a wine map of France.  It won’t be to the level of the guys in SOMM, but close.

After our tasting, we hopped back in the car and started our drive back to Arles.  It was a gorgeous drive, but we both agreed we wouldn’t recommend doing the full trail drive (especially if you’ve been to Tuscany or Napa/Sonoma) and instead drive out to Gigondas and settle in for some tastings and lunch, dinner, or both!

Now I have three fancy wines, and waiting for the perfect time to uncork them all over a nice meal with Jim!