Jim had a conference at the University of Hertfordshire last week, so I decided to tag along and explore a little bit of what the United Kingdom has to offer.  While I spent most of my days in London, our home base for the majority for the week was in St Albans (a suburban town about 31 km north of London).  On the last day of Jim’s conference, I checked out of our hotel and decided to explore the city before we jetted off to London for the weekend.

If you’ve never heard of St Albans, I’m not entirely surprised.  I hadn’t, but it was a lovely little city with a gorgeous clock tower, cathedral/abbey, as well as some Roman ruins.  What’s even more fun, is it’s also the city where a good friend (Andie) attended high school, a school I walked past at least twice a day for the entire week (it’s the one with the striped blazers that I kept saying looked like children straight out of Harry Potter).  Things like this remind me what a small world it is.

Jim and I had explored a few of the restaurants during the week, the most notable was a burger joint called The Meating Room.  It wasn’t an American burger, but it was incredibly close with tasty Stilton blue cheese (one of my favorites), and a chocolate milkshake like I haven’t had in years (read:  it was actually thick).  We were staying outside of the main town square, and previous to my Friday exploration, I didn’t really know what I might find (as I had just wandered around on the outskirts, trying to find our hotel before Jim arrived).  I am happy to report this is an incredibly lovely town with many bakeries, tasty restaurants, and some lovely architecture (Tudor, Roman ruins, etc.).

I searched on my phone for a good brunch spot, which took me to The Beech House.   The walk from our hotel to the restaurant was gorgeous – as the trees had already begun to turn and I was reminded of my favorite season back in New England – fall.  There’s something about crisp air, blue skies, and orange/red leaves that just makes me feel nostalgic and happy.

We had walked past this place a few nights before to get to the burger spot, and the food shown online looked like just what I wanted (poached eggs & toast – yes, please).  As I approached the door I found myself in line behind three women with strollers.  Once inside I was surrounded by women (alone) with babies in strollers.  I’ve never seen so many strollers in a restaurant in my life.  So, basically what I’m saying is, if you like tasty breakfast and have a small child, this seems to be THE place to go to meet up with other moms on a weekday morning.  It was PACKED.

After breakfast, I stopped in a few shops, briefly, and purchased a brownie and bread pudding (for Jim) as a Friday afternoon treat (the brownie was one of the best I’ve had) from the farmer’s market in the center of town before continuing toward the Clock Tower in French Row.  After reading some of the placards, I learned the Fleur de Lys (a hotel/inn just to the left of the tower in the middle photo below) had been a spot where King John of France had been detained in 1356.  Pretty neat.  Surrounding the tower was the main shopping district in town. 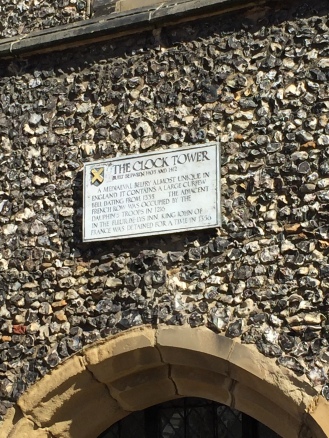 From there I decided to check out the abbey/cathedral, and was met with even more gorgeous foliage along my walk.  I feel like I’ve been in some large cathedrals, but this one seemed to be absolutely monstrous (similar to Westminster Abbey).  What’s also interesting is there was a sign outside requesting a £5 donation for visiting the church, explaining it costs £5k/day to keep the cathedral up/running.  That’s essentially £1.825 M/year or $2.19M/year.  I believe them, but wow that’s wild to think about. 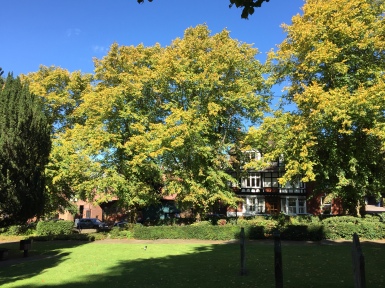 After touring around the abbey, I sat in the sun and ate my brownie (it was delicious) then decided to check out Verulamium Park, which was a quick walk from the abbey, through the St Albans Abbey Gateway (pictured below). 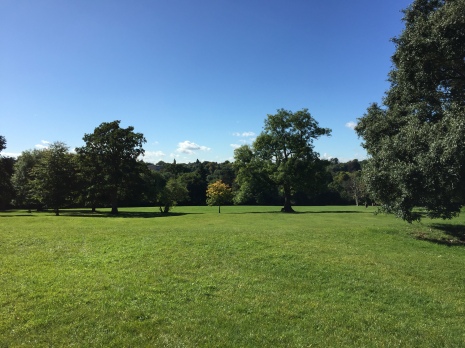 Verulamium Park is a 100 acre city park named after the Roman city Verulamium (I’m also amazed at how many Roman ruins are throughout the UK…something I never really thought about before, as it seemed so far away…amazing reach the Roman Empire had).  There are some really gorgeous lakes (with at least 10 different types of water foul), benches, and park equipment (lots of soccer fields).  I wandered around and found myself relaxing close to the remains of the Roman city wall (I took a picture, but I don’t see it on my phone now).  This would be an amazing picnic spot if you lived in St Albans, and that Friday was an ideal day for a picnic!  Since I’d already eaten by brownie, I decided to lounge in the sun while finishing up my book (The Handmaid’s Tale). 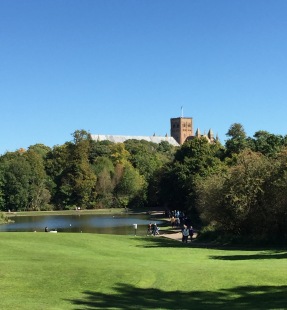 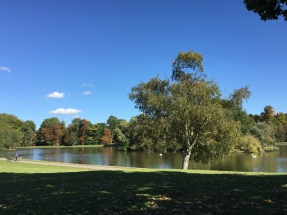 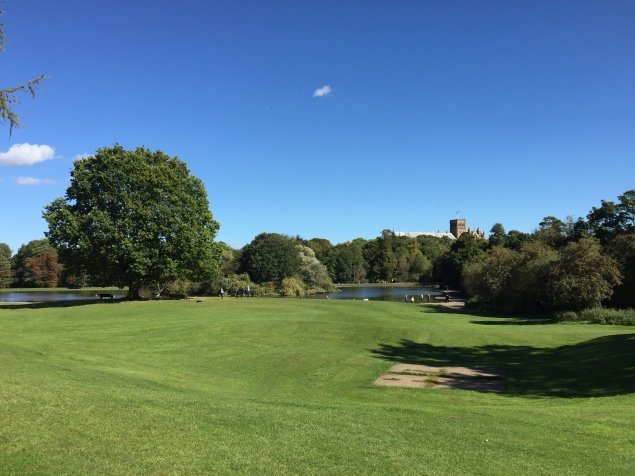 After an hour or two, I started to make my way back toward our hotel to meet Jim for our trip back into London for the weekend.  It’s at this time that I noticed a pub situated between the park and the small park just behind the abbey/cathedral – Ye Old Fighting Cocks.  What I didn’t know at the time (Andie filled me in at dinner that night) was that this is said to be THE oldest pub in all of England.  I’m now wishing I had stopped for a beer as a little afternoon treat.

The walk back to the hotel afforded more fall views as well as one of my favorite views of the trip.  I’d always heard Ivy is bad for your brick/mortar.  And I’ve definitely seen green ivy on houses, but never red/yellow/orange/green ivy.  I was in love.  I wish every city had houses/buildings that looked like this.  After our trip, I am officially in the mood for fall!

If you’re looking for some relaxed exploring in a gorgeous suburb, I cannot recommend this spot enough!