In typical fashion, I had planned an ambitious itinerary for my day trip outside of London to visit Stonehenge and Bath.  In fact, when I mentioned it to the guy at the ticket counter he made me repeat myself twice then sort of shook his head.  For the record, I successfully saw both, but would love to go back and see a little more.

After spending the morning/early afternoon in Salisbury/Stonehenge, I caught a train to Bath.  Though Bath is only 40 miles or so away from Salisbury, the weather was infinitely different, and I was blessed with mostly blue skies with crisp, autumnal weather.  I was in heaven.

If you’ve never been to Bath, please know I am absolutely, positively in LOVE with this city.  From the Roman baths to the Georgian architecture, to the well manicured EVERYTHING to the walkability.  If I was British, I would want to live here or at least retire here.  It’s positively lovely.

I made my first stop at the Roman Baths.  From the outside, it’s gorgeous (first photo, top left), and there are extensive ruins throughout the site with audioguides as well as experts peppered about to fill in any gaps.  I was amazed that the water is still pumping through (and warm), plus it affords some amazing views (as well) of the cathedral/abbey.  I think the element I found the most interesting was their method of heating the tile floors (see top right photo and photo directly below it for how it looks today).  How ingenious/smart. 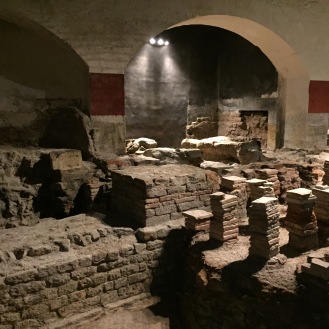 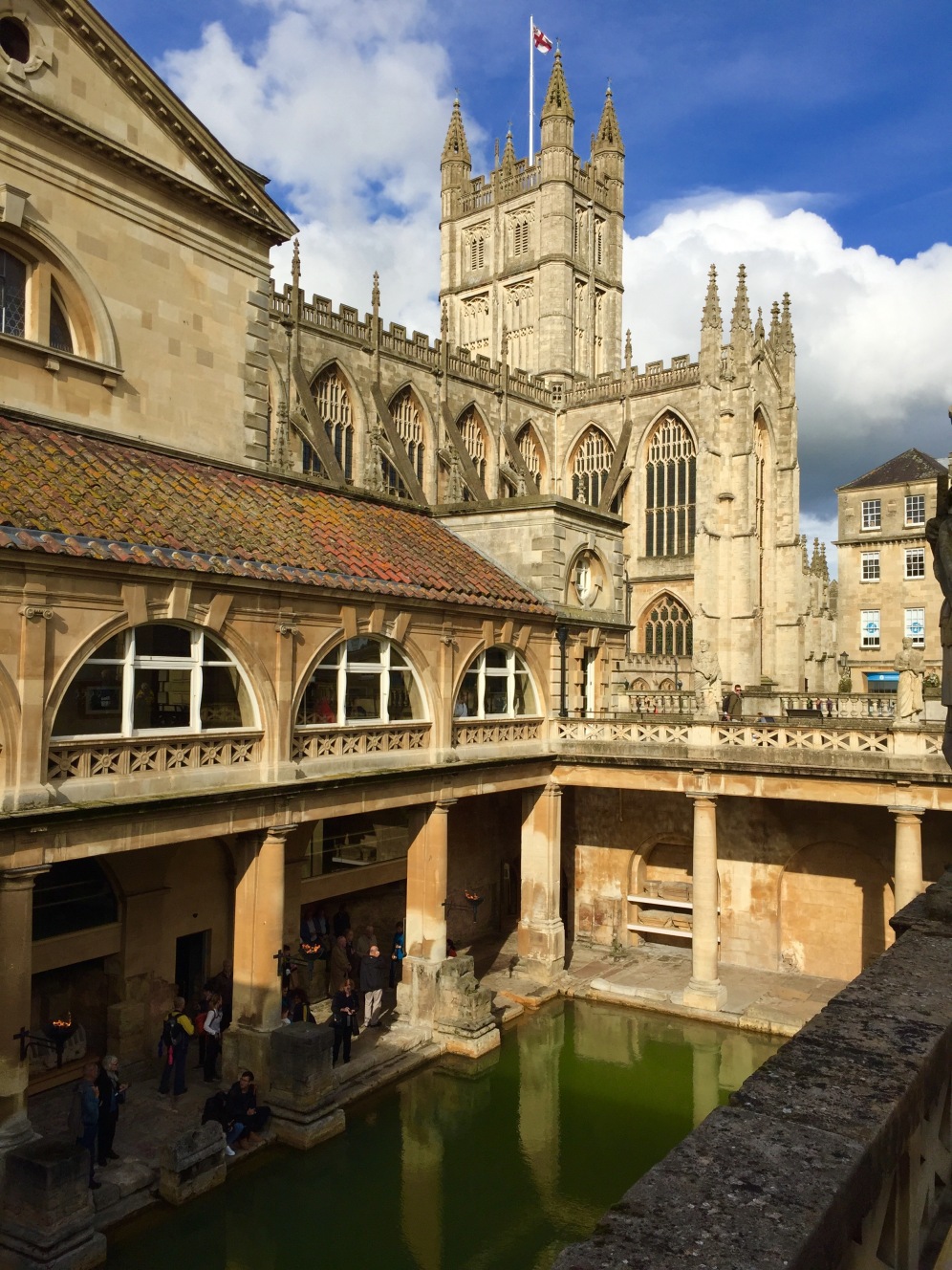 Following my tour of the Roman Baths, I walked next door to the Bath Abbey.  I signed up for the last Tower Tour of the day (at 5pm…there’s one on the hour, every hour) and wandered about the church until 5pm.  It was absolutely gorgeous.  The ceiling was built by the same gentleman who made the lady chapel in Westminster Abbey in London (more on that later).  But the best treat was listening to choir practice.  There was a soprano that literally sounded like an angel.  The acoustics in there were phenomenal.  Easily one of my favorite things of the day. 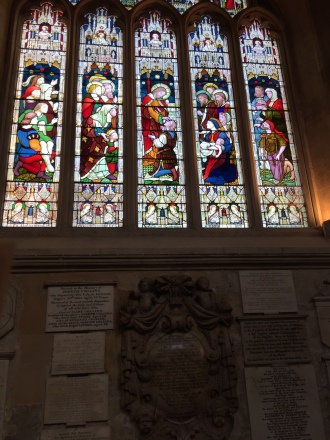 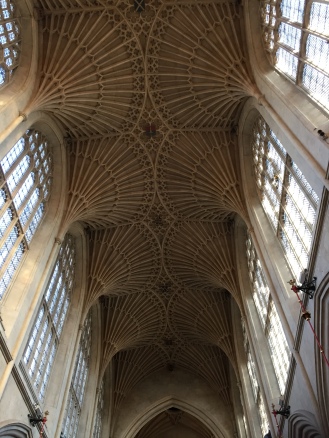 At 5pm, I met with the other tour goers and guide, not really knowing what to expect.  It was dubbed a Tower Tour, so I figured we’d walk up 300+ steps to the top of a tower for some amazing views.  We did that, but we also got to see some behind the scenes workings of the church bells and architecture, which was really cool.

In the first photo below, you’ll see the ceiling I mentioned above.  The top right photo is what that looks like up in the ceiling.  Then I got to stand immediately behind the clock (very cool), which you can see the view from the outside in the photos below, as well. 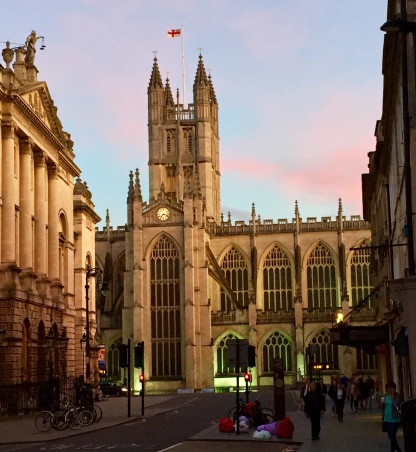 Maybe the neatest, though, was being up in the bell room at half past 5 when the bells started to chime.  I’ve never seen anything like that, up close.  It was just incredibly cool.  Additionally, we were given a tour of all the different ways (throughout history) the bells were run (now it’s automated).  A funny story is that a Vicar had the automation created (bottom left) because his bell ringers always showed up drunk or not at all.  The image on the bottom right is all the pulls to make the bells ring manually (can you imagine pulling those from the ceiling?).  While the upper right is the more modern option, sort of like a player piano. 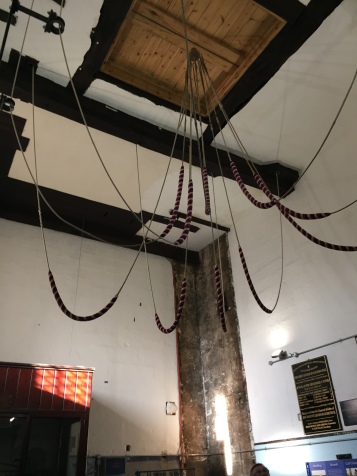 Then came the extraordinary views as we climbed onto the roof in the tower, which afforded AMAZING 360 degree views of the entire city. 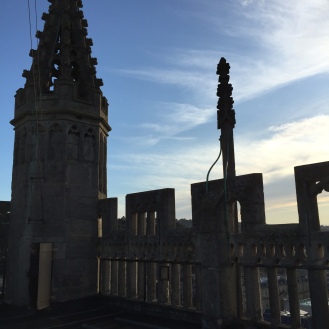 Once the tour was over (it’s about an hour), I hurried toward The Royal Crescent before sunset.  I decided to walk along the Avon River and came across the Pulteney Bridge (below) as well as the Gardens Bath (Garden with the Jane Austin flowers).  This felt about as picturesq as it could be.  Just gorgeous. 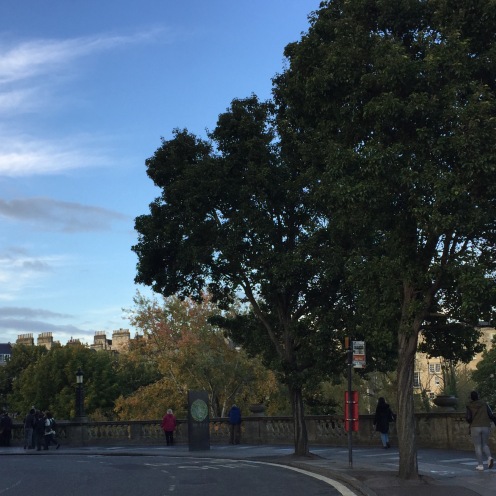 From there I cut across town, through Queens Square and past the Jane Austen Centre (unfortunately it was closed) and made my way to The Royal Crescent (below, left and upper right) and The Circus (below, lower right).  Both are amazing examples of curved Georgian architecture.  If you scroll back up to the rooftop photos, you can see both of these in the distance.  It felt so regal and lovely.

After taking in the Royal Crescent, I deduced I had about an hour and a half before I needed to be back at the train station (to arrive back in St Albans by 10pm), but I wanted to try a restaurant, The Circus.  I wasn’t sure if I could eat a two course meal in time, but I did.  It was wonderful (beet & apple soup, a roasted chicken delicious thing).  If you’re in Bath and looking for a perfect meal, go here.  Thank me later. 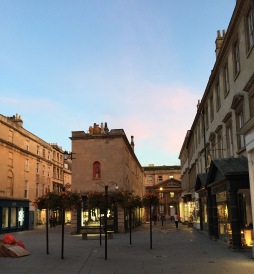 After dinner I somewhat retraced my steps on the way back to the train station and was rewarded with the cotton candy skies atop warm, golden buildings, which only made Bath appear more lovely.

I said it before, but I love Bath…after reviewing these photos, how could I not?  I’m incredibly excited to go again with Jim (or Andie!).