Needlepoint and embroidery has played a large role in my life, not because I’m a big needlepointer or embroiderer, but because my mom is.  Some of my first memories involve ANG and EGA meetings at Nancy S’s house.  These stand out the most to me because she lived close to our church AND because her husband played games with us/entertained us and offered us (my brother and I) snacks.

To my mother’s chagrin, I preferred reading books and watching movies to embroidery and needlepoint (though I did make my fair share of coasters, ornaments, and even a cross-stitched duck for my Aunt Jennifer’s first baby shower).  I did, however, love the embroidery and needlepoint work of my mother and her friends.  Case in point – I’ve admired a cross-stitch sampler that has hung in the entryway of every house my parents have ever had.  It was a gift from my mom’s best friend (Vicki, also one of my favorite people).  Over the last 10 years, I have told my mom that I would like a sampler, secretly hoping she’d make me one.  That never happened.  So, after Jim and I got married and moved to France, I decided I’d make him one for our second anniversary (cotton = the thread).

Not surprisingly, I enlisted the help of my mother to find a pattern/kit who in turn enlisted the help of her friends from ANG and EGA.  When I flew home for the Derby in May, my mom had a large stack of options waiting for me.  I decided on the Strawberry Border Sampler in part because it wasn’t too big and because we LOVE the strawberries here in France.  With that, we set out to buy the thread at our local Hobby Lobby and my mom gave me some linen and a frame.

A little unsure where to begin, my mom advised I create a definite “middle” of the piece.  If you look at the first couple of photos below, you’ll see a black thread that’s appearing every five threads.  That was my only guide.  And let me tell you – that part took FOREVER.  It was also nearly impossible to see the holes.  I sat in my mother’s needlepoint chair with a pair of magnifying glasses (the first time Jim saw me in them he said, “Well hi there, Grandma McNamara.”), and a giant neon light.  I’ll bet this part took me three or four hours.  I won’t say I was regretting this project, but I definitely had a much greater appreciation for needlepoint and embroidery.  I’d say to my mom, “It’s really hard to see the holes to count.”  And she’d chuckle and respond, “You know, they used to do this by candlelight.”  I can’t even imagine.

I flew back to Toulouse with only the flowers from the middle topiary complete.  I was determined to have the whole thing completed before our anniversary at the end of October.  Unfortunately, I was pretty jet-lagged once back home and my poor sampler sat, untouched until August when I decided I needed to get serious if I was going to complete it in time.

I wish I’d kept track of how many hours went into this project, but I did not.  If I had to wager, I’d guess it was over 100 hours, at least.  In the photos below, you can see my progression from mid August to October 26th (I did finish it before our anniversary!).  The letters each took anywhere from 20-30 minutes and were probably my favorite part (slightly less counting to do).  The border was (oddly) a spot that went pretty fast (only one color of thread).  By the time I was working on adding the strawberries to the border, I was moving super fast and might’ve even said, “Maybe I should’ve picked a larger one.”  I felt secure in my choice once I had to add the birds, butterflies, and mini strawberries (those took WAY longer than anything else as they were just one thread over one strand of linen). 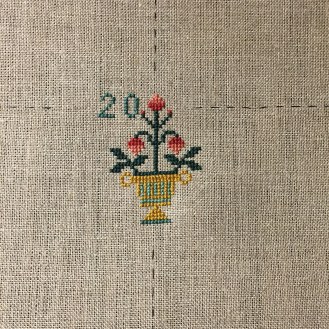 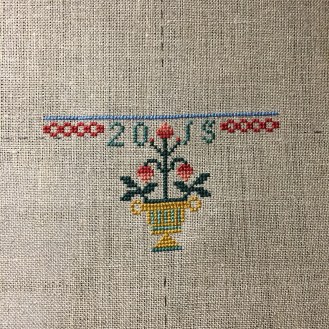 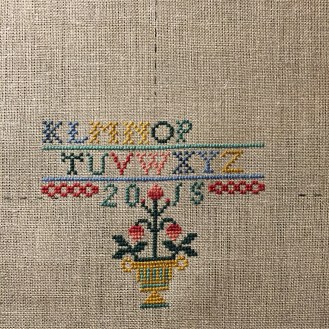 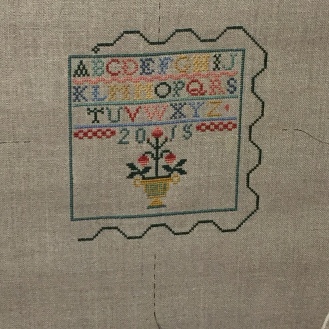 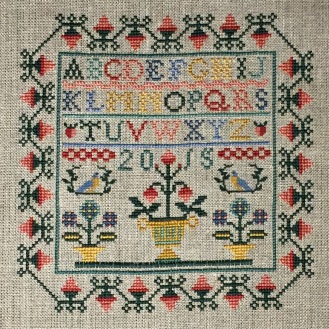 There are definitely some mistakes (I had to pull out and re-do things more than I care to admit), some of which I kept (I like the character), but my completed project is below, and I couldn’t be more proud.  What’s even better is this is an heirloom Jim and I will have forever.  Maybe we’ll have a little girl or little boy who will love ours as much as I loved my mom’s.  That’d be great.

I’m not sure I’ll be picking up the needle again in the near future, but I’m definitely not against it, either.  Maybe after a break I’ll think about tackling something else.