I love opera.  I love getting dressed up, seeing everyone else dressed up, listening to the sopranos and tenors belt out aria after aria, and the general excitement of a live performance.  It’s outstanding what these artists can do with their bodies and without amplification.  Astounding, really.  Imagine my delight when I discovered we could attend opening night of La Traviata at Teatro dell’Opera in Rome.  I have been to six operas in my life, but none in Italy.  Jim has never been to an opera – how lucky for him to see his first in Italy!  I could hardly contain my excitement.

I purchased our tickets in June…for a trip at the end of October.  And, honestly, that much pre-planning was worth it.  The cherry on top was the fact that Sophia Coppola was directing it AND we’d be there for opening night.  I had read opening night often brought out fancier dresses/gowns and even tuxes (we saw a little bit of everything).

We took a cab from our B&B to the theater, marking our first car ride through Rome and a defining moment where we decided we never want to drive in Italy, ever, and decided the craziest spot for driving was in front of the Vittorio Emmanuel Monument.  Essentially, there are no lines on the road and it appears to be an all-out free for all.

We arrived about 15 minutes early, made some bathroom trips and found our seats on the main floor.  I have to admit, the boxes LOOK fancier and like they’d be more fun, but according to my research, unless you have a front row seat in any balcony/boxes, your view is obstructed.  We opted for the end of the row on the right side.  I think they were perfect. 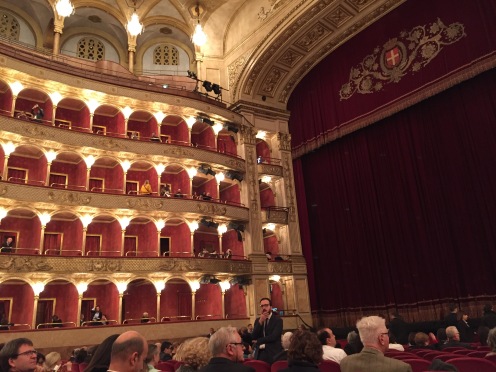 I’d read Teatro alla Scala Opera House in Milan was the “beautiful” Italian Opera House while Teatro dell’Opera in Rome was known for being more utilitarian.  Having visited both, I’m not sure I agree with that sentiment.  Both are lavish and lovely.

Before the first act, we asked our neighbor to take our photo (below), then we settled in for a night of great music. 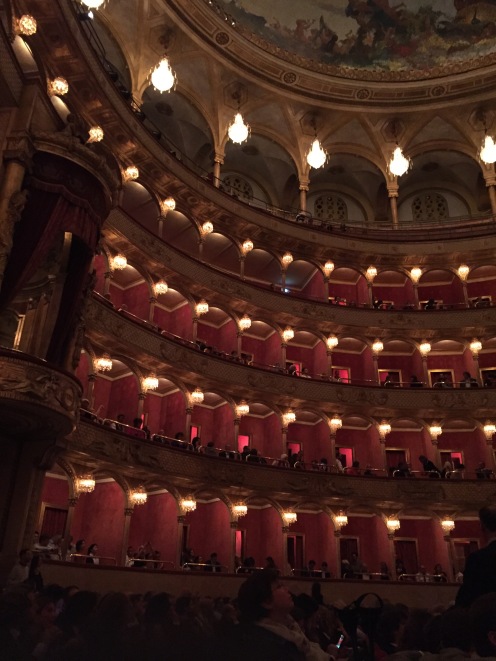 We weren’t sure if there would be supertitles (there were), so we decided to bring ourselves up to date on the plot behind La Traviata, prior to attending.  Our first order was to translate the title – A Fallen Woman.  Ok, that could mean a lot of things.  Second thing we learned was that it was a Guiseppi Verdi opera (we kind of already knew that, but basically the head honcho of Italian Opera), but what we didn’t know was it was based on a play by Alexandre Dumas (one of my favorite French authors – The Count of Monte Cristo, The Man in the Iron Mask, The Three Musketeers).  Additionally, our initial reading mentioned Violetta was a courtesan in Paris and what would progress was a bit of a tragic love story.  Great, we thought, we’re all set.

The first Act begins with Violetta descending a large staircase in a GORGEOUS green dress (I loved all of her costumes) then a party erupts.  This is where I heard the first familiar song, “Libiamo ne’ lieti calici” or “Let’s drink from the joyful cups.”  If listening to that song doesn’t get you hopping in your chair, I don’t know what will (I was also definitely humming it as we left).  You can hear Maria Callas sing a number of the arias here.

During the second intermission, we discussed what was happening.  From everything we had seen, there was a couple who had fallen in love and we both expressed confusion when the father had come to protest their union and said it brought shame to the family and he persuaded her to leave her son and go back to her former life.  I said to Jim, “I think this is the opera they attend in Pretty Woman.  I wonder if there’s some significance to that.”  So, I started googling and discovered I did NOT know the definition of a courtesan (i.e. a prostitute) and there is SO much significance to that opera being chosen for Pretty Woman as both are about prostitutes who fall in love with wealthy men.  Our newfound knowledge made watching the remainder of the opera even more enjoyable.  This also made me wonder if Pretty Woman watchers understood the reference (I definitely did not) and kinda made me want to give Garry Marshall a hi-five.

After the third intermission, we learned Violetta had tuberculosis/consumption.  (This lead to the question, “Why is it called consumption?”  Apparently it’s because the tuberculosis “eats you away,” making you quite thin).  Unfortunately, this story doesn’t end well for Violetta or Alfredo, but it does supply us with one of the most lovely arias I’ve ever heard: from the last scene in Pretty Woman.

There were at least five curtain calls (the most I’ve ever seen) and the opera house erupted in applause, the loudest for Violetta and Giorgio (Alfredo’s father).  We slipped out after the final curtain call and made our way to the cab line.  The Italians know how to exit an event.  There was a never-ending line of cabs.  Everyone in line was given a number and when your number was called you hopped in your cab.  Aside from one woman (who was cussed out by a number of people), this system worked quite well and was surprisingly efficient.

We continued to sing the songs the rest of the trip.  What a magical way to spend a Sunday night in Rome.