After touring Granada and the Alhambra, we hopped back in the car for our two hour drive to Ronda.  I know I said the scenery from Seville to Córdoba to Granada was pretty (and it is), but somehow the landscape just continued to get more and more interesting, even though in rained almost the entire drive.  Now we saw vineyards, haciendas, and olive trees on rolling hillsides.  I wish I’d taken some photos.

Our hotel (Hotel Catalonia Ronda) was the perfect location (just across the street from the bull ring) so we checked in, relaxed a little, then made our way to a tapas and wine bar – Entre Vinos.  The wine bar was a short walk from the hotel, nestled away on a side street.  We were able to find a table without a problem (though it was packed about 20 minutes after we sat down), ordered two Ronda wines (and we saw that they also had a bottle of the Ronda wine we had in Córdoba), some Iberian pork and deer skewers (the pork was so good we ended up ordering more) along with a cheese plate.  After our hearty vegan lunch in Granada, this made for the perfect end to the day.

The next morning we were pleasantly surprised to find clear skies and sunshine in the forecast (for the record, this was the sole clear day of the trip) and set off for our first hiking expedition in Sierra de las Nieves (more on that in another post).  To prepare we picked up some picnicking essentials at La Casa del Jamon (sandwiches, cheese, and chocolate) and some water and apples from a supermarket around the corner.  As we were walking to the car we noticed a gorgeous park and decided to go have a look at the view (below).  This area would be key for our late afternoon hike, as we discovered that’s how you’ll get the great view of the Puente Nuevo or New Bridge. 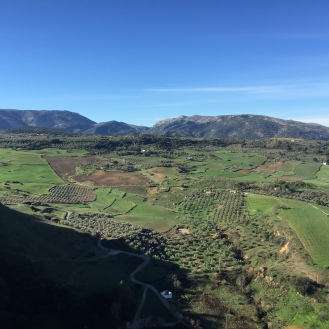 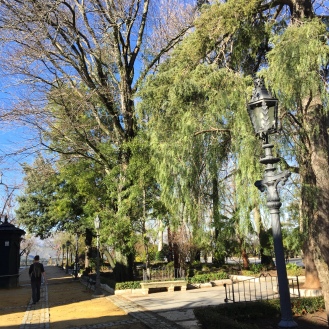 After our trip to Sierra de las Nieves, we returned to Ronda.  Clouds had rolled in, but we wanted to make the most of the afternoon and explore while the sun was out.  We’d decided we’d like to get a good view of the bridge and thus googled, “Where to go to see the Puente Nuevo.”  Surprisingly, Trip Advisor had a pretty accurate post from a 70 year-old British woman that we used as our guide.

If you look at the photos above, you’ll notice the little white roads.  We hiked down to those and into the gorge.  Passing through numerous rocky paths, a few farms, as well as two horse stables.  The Trip Advisor directions had said the hike would take about two and a half hours and was relatively easy (she said her only exercise was on the tube in London).  After a full morning of hiking we thought to ourselves, “That sounds perfect.”  While the hike was about two to two and a half hours, I wouldn’t say it was easy or would be good for anyone whose main exercise comes from walking to/from the tube.  It’s about six or seven miles and up and down some steep and not so steep hills.   Her photos showed fields full of poppies and other wildflowers.  Unfortunately, nothing had bloomed yet while we were there…but I can only imagine how gorgeous this walk/hike would be on a sunny day with red, yellow, purple, and blue flowers along the way with the stark rocks.  A reason to go back, I suppose.

We also read this was “off the beaten path” and it really was.  We saw a group of German tourists (they looked absolutely miserable), some Spanish locals (they were reading books or passing us at embarrassingly fast paces), and maybe three or four cars.  All in all, I’ll bet we didn’t see more than 10 people the entire hike.

Probably her best instructions were to bear left if that was a choice.  That made it a pretty fool proof walk.  About an hour and a half or two hours in, we finally got to the view we were seeking.  I don’t think it was exhaustion, but this was definitely a sight for sore eyes.  I wish the sun had been out or we’d been able to capture a pretty sunset, but even with the clouds it stands as one of the prettiest views of a bridge. 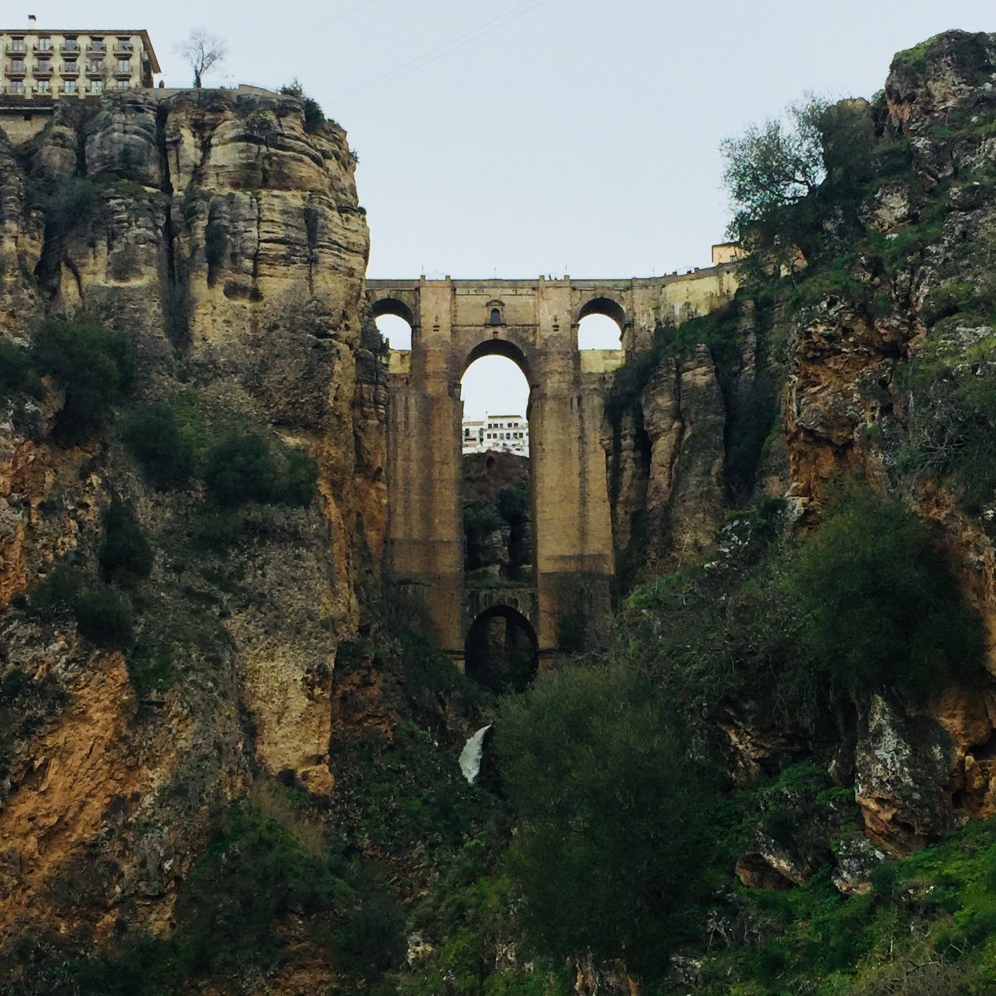 From there the directions said we could hike up the cliffs, but she preferred to stay on the path.  If you look at the photos above (in the middle) there is a little path.  We saw a couple coming down with a dog (originally I though they were on horseback).  Given our legs were like jelly (or at least mine were), we opted for the path, as well.

Then we hiked back up to town and to the viewing platform where you can see the opposite site of Puente Nuevo (below, left) as well as Puente Viejo off in the distance (below, right).  I think the platform view is impressive, but I’m still glad we made it down for our near private view. 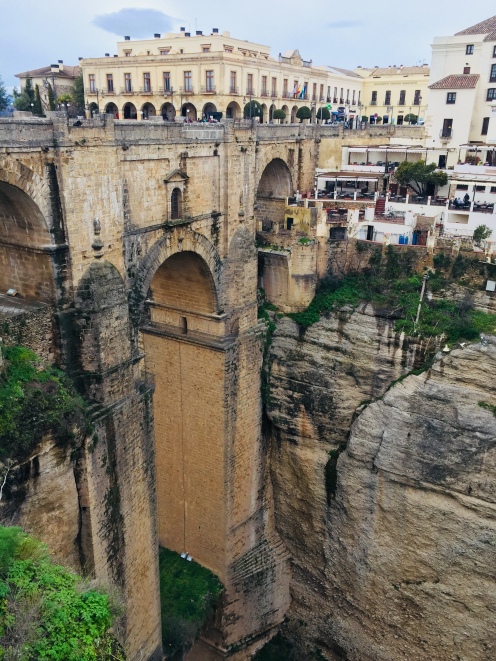 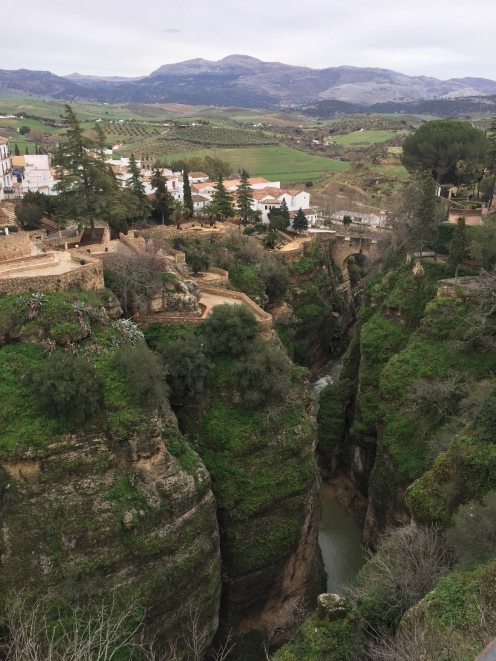 About 30 minutes after we returned to our hotel it started raining again.  We got cleaned up and made a dinner reservation at our hotel for 8pm.  We arrived on the top floor and found only one other diner in the restaurant.  Since we were in Spain, we figured we were just early.  Sadly, though, it did not get busier as our meal went on.  And believe me when I say this is a complete and total shame as our dinner was absolutely perfect and our waitress adorable (I’m not just saying that because she complimented the amount of Spanish I knew, though it doesn’t hurt).  We both ordered a glass of red wine, steak, and an appetizer of roasted vegetables.  This was the absolute perfect meal.  As such, we cannot recommend this hotel or the restaurant enough.

That night we both slept like babies which is good as we had our second hike the next day – La Garganta Verde!