Two Saturdays ago I took my fourth Labo & Gato class – Viennoiseries, which is also the class I’ve been looking forward to completing since we moved to France (you can find the other classes here & here, but not the macaron class).  Prior to France I was never a huge fan of croissants, but after our first trip to Paris (where we had the most amazing croissant), I became a convert.  Now I know how to make croissants, chocolatines (or the pain au chocolat in the North or the chocolate croissant in the USA), and pain aux raisins (Jim’s favorite).

The timing of the class ended up being pretty perfect, as my brother and sister-in-law (Michael and Michelle) were scheduled to arrive for their visit to Toulouse the Friday before my class, but their flight from Atlanta was delayed and they were stuck in Amsterdam (though I’m not sure if “stuck” is the way I’d put it) with a day to explore.  So, they ended up arriving a couple of hours before my class ended, and were able to snap a few photos of me in the baking act (that’s me in the black shirt in the bottom right).

This was another winning class, probably my second favorite (the pastry basics was so much fun) to date.  I was partnered with Monique (above in the stripes), a woman in her 60s or 70s who spoke zero English and was incredibly talented when it came to making pastries.  We were the only two who had taken a class there before (did I mention Youssef now knows me and introduces me to the class as a regular?), and I think ours came out the best.  Monique wasn’t quite as much fun as Fabienne, but she was friendly and always wanted to make sure I understood what was going on.  She’d be my pick for a partner any day.

Another student (above in the white shirt, in the middle) was quite serious.  She brought her own jacket and apron.  In the four classes I’ve taken, this has never happened before.  I think it tickled Youssef, as well.  Her pastry rolling skills were on point and she meant business.  She was also incredibly friendly/nice.  In many ways it felt like there were two instructors there that day, as she seemed just as much a professional as Youssef.

Interestingly, making viennoiseries is quite similar to making the millefeuille pastry – lots of chilling, lots of rolling, and many of the same ingredients.  I’ll follow-up with subsequent posts with step-by-step instructions for how to make each type, but I’ll probably wait until our kitchen isn’t a furnace (which will probably be September at the earliest).

The class was over close to 1pm, and I came home to a napping apartment, but they quickly awoke for a tasty French feast of duck rillets (even better than pork rillets) and foie gras from Jim’s friend & coworker, Thibaut (both were amazing), some fresh cherries and dates from the market, a little white wine from Narbonne, along with some potent cheeses they picked out with Jim at Betty’s, and of course the freshly baked pastries I’d made that morning.

Another bonus – I also brought home some uncooked dough (which we were given the option to freeze for eating later or just bake at home), so we were able to enjoy even more tasty treats with Michael and Michelle for longer. 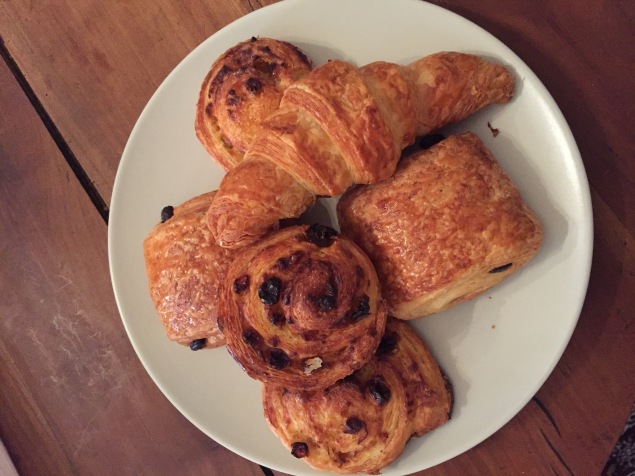 Not to toot my own horn, but these are probably some of the best pastries I’ve had in Toulouse and maybe (even) in Paris.  I’m super excited to start rolling up my sleeves and making these tasty treats on the regular.  Upcoming visitors – prepare yourself for the deliciousness 🙂