Michael and Michelle came to visit us in early July with the goal of accomplishing a line on their bucket list:  Running with the Bulls in Pamplona.  As a dutiful sister, I obliged and helped with the planning, which took us to Pamplona on the first day of the festival (July 6th) and the first (of seven) days where the bulls run (July 7th).

My first knowledge of the Running of the Bulls came from the MTV television show, Road Rules Europe back in 1997 (you can see the episode here at the 12:25 mark).  I can remember thinking it seemed like a crazy and yet cool thing to do.  Fast-forward twenty years, and I was more comfortable watching the run from a balcony (with Michelle), while Michael was the only one to actually run with the bulls.

If you’re interested in going to Pamplona for the run, I cannot recommend this site enough.  I was able to nab two balcony tickets and a hotel room only one month before we were set to arrive.  It’s a bit expensive (read – the most expensive 24 hours I’ve ever had), but these guys are professional and super helpful.  In fact, once you’ve signed up with them, they send you a series of emails explaining what to expect for various activities, where to eat, where to go for the run, etc.  Really great.

Anyway, we decided to drive from Toulouse to Pamplona.  This was mostly to give us the flexibility of arriving and departing when we needed/wanted.  I’d say the drive is somewhere between four and five hours (door to door), and it’s gorgeous.  In the past month or so, I’ve come to know A64 quite well, but the drive from Biarritz to Pamplona was totally new territory and (maybe) the prettiest part of the drive.  I think most folks might drive/train from Barcelona to Pamplona (I can’t comment on that), but the San Sebastian to Pamplona is gorgeous through loads of huge, green hills/mountainsides.  Imagine the below photo for about an hour.

We arrived/checked into our hotel close to 2 or 3pm, unpacked, applied some sunblock, and decided to start our walk into the historic district to find out where Michael needed to be for the running and us for our balcony in the AM.  We had an early wakeup (needed to be in our places by 6:30, 6:45am at the latest), so we timed how long it would take us to get to each spot from our hotel (about 25 minutes).

On our walk we came to a carnival type set up with a ferris wheel, tons of churros, sangria, beer, and knick-knack stalls.  We stopped for some sangria, then continued into the historic district (below).  I was pretty excited to find my Spanish was coming back to me (pretty quickly), and I was ordering without any trouble.  In fact, one of the vendors selling Michelle some charms even asked me to translate something from Spanish to English for them (I live for this stuff).  Since we arrived after noon, we missed the opening ceremony (where there’s mustard, sangria, and champagne EVERYWHERE…so you’ll see some pink and yellow shirts walking about). 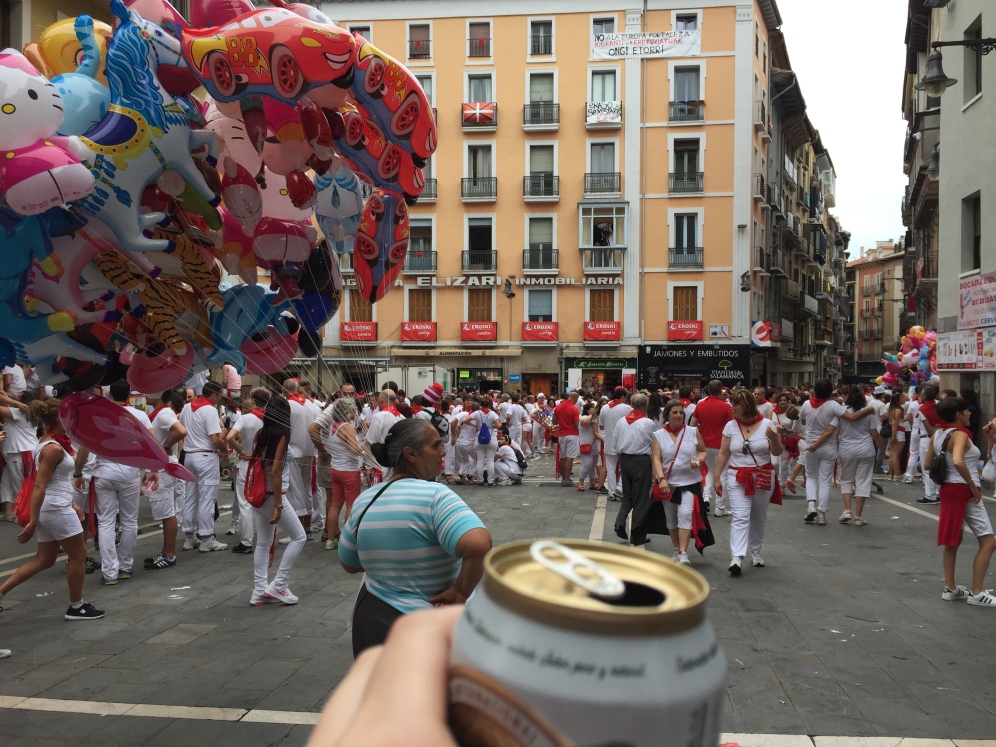 While the photos make it look busy/crowded, at this point in the day it was pretty tame.  We imagine most folks were having an afternoon siesta before the real drinking/partying started up in the early evening.  One surprising thing – we saw lots of families and lots of young children amongst the crowds (those balloons aren’t for adults).  More children and babies than I EVER would’ve imagined.  Truth be told, I’m thankful we did our walking earlier, as with each hour it got a little smellier and dirtier and trust me way more drunk folks. 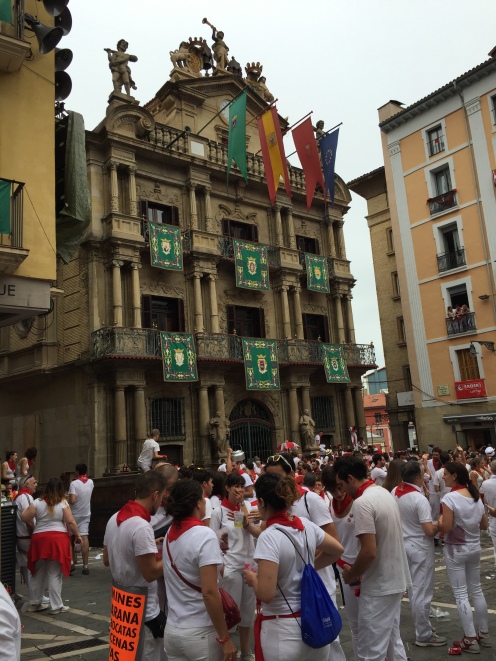 The photo in the top left is the spot where you should wait if you’re interested in running with the bulls (it’s also a spot for watching some of the Comparsa of Giants).  The other two photos are us in front of/close to the bull arena (Michael was inside the next morning).

We continued our tour around the city, stopping for a beer (though mine is an Amstel Radler…couldn’t find any Damm Lemon, unfortunately).  The other two photos below show some of the city squares with people napping as well some pretty serious dance parties (no photos on my part).

As the sun started to go down, we had wandered to the bull pen (start of the run) as well as some ramparts and pretty views overlooking the city and mountains in the distance.  Pamplona really is a much prettier city than it gets credit. 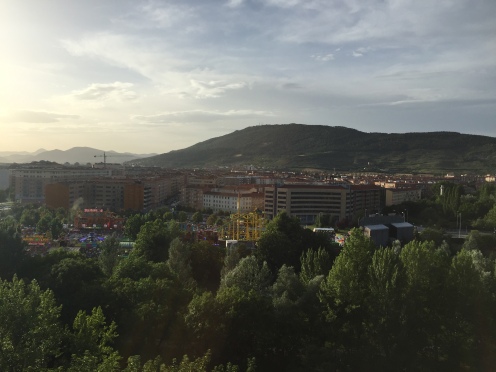 After dodging drunk people for about an hour and a half (I’ll lead your to draw your own conclusions as to what we were dodging…but trust me it is EVERYTHING you’re thinking it could be), we decided to head out of the historic center to find something to eat and rest up for our early wake up.  Should you find yourself in Pamplona, I 100 percent recommend you eat at El Figon and order the lamb for two.  Michelle took a photo of the lamb (below), and it was maybe one of the tastiest cuts of meat I’ve ever had, ever.  It was exactly what we needed after a long day of driving and walking about.  The spot was also oozing Spanish hospitality – as we were brought some sort of “Baileys-esq” digestif, which our waiter kept refilling, not listening as we protested that we had to get up early.  Really the perfect end to a great day in Pamplona.

We started our day with the bulls around 4:30am, leaving our hotel by 6am.  We dropped Michael off at the town hall and quickly raced to our spot on Estafeta Street (they close the streets at 7am to foot traffic) only to find our apartment and wait for our guide to take us up to our balcony.  We chatted with some other folks who were waiting to get into their balcony spot when a woman came for 41 Estafeta Street.  “Yes!”  We thought, as she arrived.  She pulled out a paper and started calling off names.  Our name was not on it.  This is where the panic set in.  I furiously fumbled around in my phone looking for our confirmation, which listed the company we were with.  I found it, only for the woman to say she didn’t know anything about the company and we must be at the wrong spot.  I was quickly seeing $600 go down the drain.  Luckily, Michelle kept a clear head and decided we should just buzz ourselves up to the third floor.  Thank god for Michelle, as we made it up just in time, before we might’ve been forced off the street.  There we found our guide who was like, “Where have you all been?!”  They must’ve gone up before we arrived.

Our balcony was perfect.  We were about mid-way down Estafeta Street (aka the longest street of the whole run, just after Dead Man’s Curve) and up on the top floor balcony.   Essentially, companies work with residents to rent out their balconies for an hour and a half to watch the runs.  Our apartment was owned by THE cutest Spanish man and his elderly mother.  They had coffee and light pastries to eat.  The Spanish man spoke no English, but I was excited (again) to practice some of my Spanish.  It was really fun to carry on a conversation (not in English) with ease for a change.

What’s crazy about the running of the bulls is that it does not favor the uninformed.  The streets were crowded when we dropped off Michael and continued to be crowded once we were up in our balcony.  There were tons of people who were pumped up and excited about their spots for the run.  Unfortunately, though, all of the people on our street were corralled and removed between 7 and 7:30am.  Then the mayor came through and shook the hands of the handlers and trash was cleaned up once again.  After some ceremonial songs, the pen (where we dropped off Michael) was opened up and runners crowded the streets again. 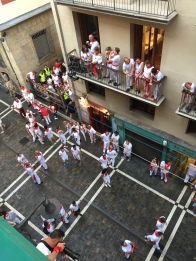 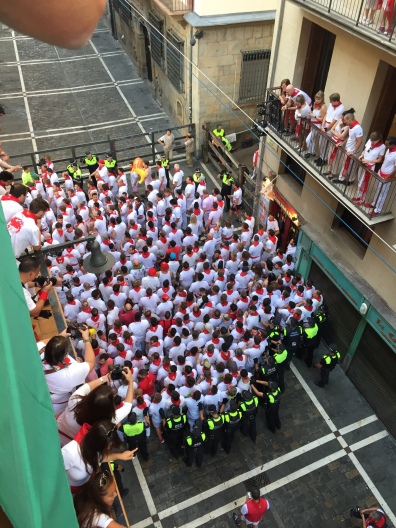 There were 10 people in our apartment, five on each balcony, which meant everyone had a great view.   I was a little surprised that EVERYONE was American and most were from California.  A gentleman on our balcony was from Utah and four of his children were all running (!).  What was cool was he found his kids before the race started (they’re in the center of the photo on the below right (black shirt, all huddled together).

Like clockwork, we heard the gunshot (?) and then EVERYONE started running like crazy as fast as they could.  Michelle took a video and I took photos as the bulls ran past.  I swear, it was all over in the blink of an eye.  I didn’t see anyone get gored or knocked down, but a gentleman WAS injured not far from the spot close to all the guys in neon green in the bottom two photos (I believe he was also American…more on the injuries from that day here).  What was also surprising was there was a SECOND running of maybe 3-5 bulls that were behind the first group.  Everyone on the street was surprised and freaked out by this realization (Michael said the same thing as he was running).  I’m not sure if that’s typical or not (I’m guessing not), but it was pretty interesting to watch as people looked so relieved to have the bulls pass them only to be freaked out again by a second group! 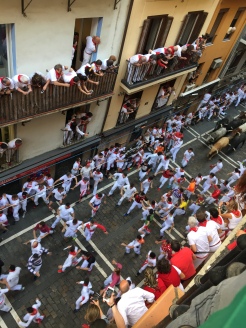 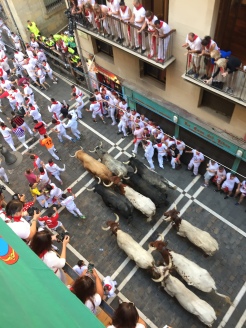 Michael didn’t take a phone with him, so we weren’t sure if he was running, if he was OK, or where he was (from an aerial view, Michael looks like everyone running…dark hair, white outfit).  But we’d decided before that he would come back and meet us at our balcony, so we stayed and waited until he found us.  I’m happy to report he was NOT injured and rejoined us maybe an hour or so later (he ran all the way into the arena and then couldn’t get out). 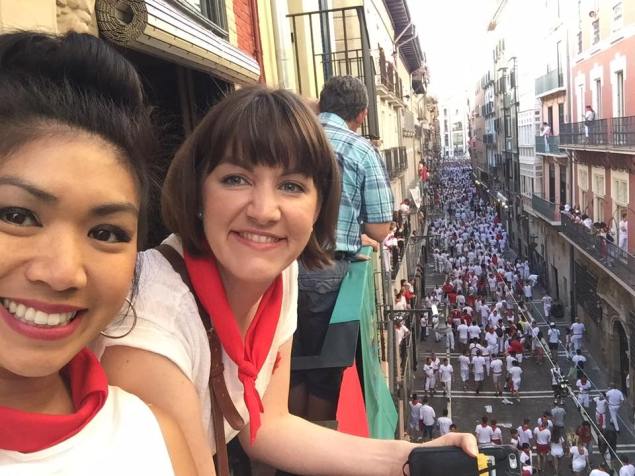 When we were reunited with Michael, he wanted to retrace some of his race steps and have some pictures taken (you’re not allowed to take photos if you’re running…though he said many folks still did).  Below are some quick photos of all of us post run and Michael outside the arena post-run (well deserved beer not pictured), as well as a photo of our trusty balcony. 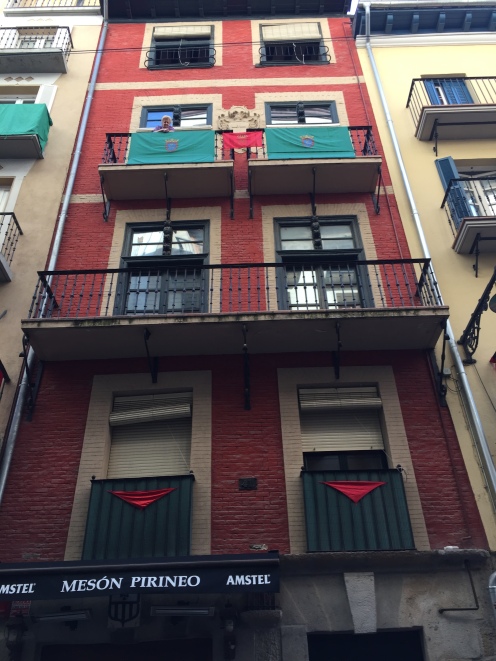 As we were re-walking the run, we passed a number of churro spots with lines that you cannot even imagine.  I ended up being the only person who wanted some churros for breakfast, which, believe me when I say they give beignets a run for their money.  I could eat those every day (I could also weigh about 50lbs more). 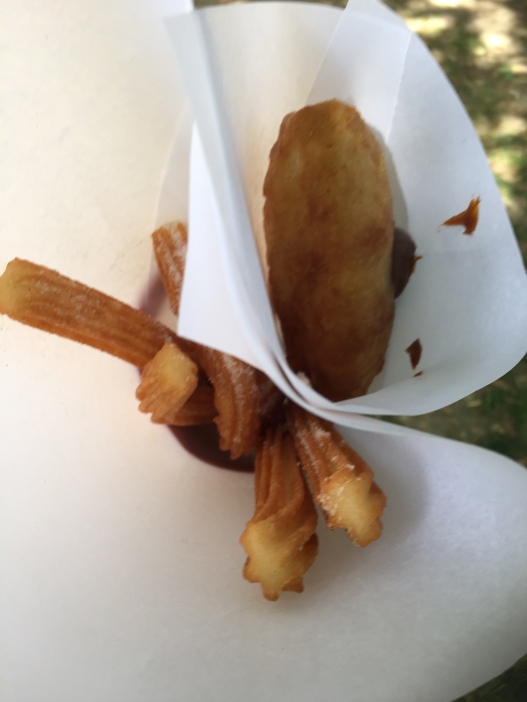 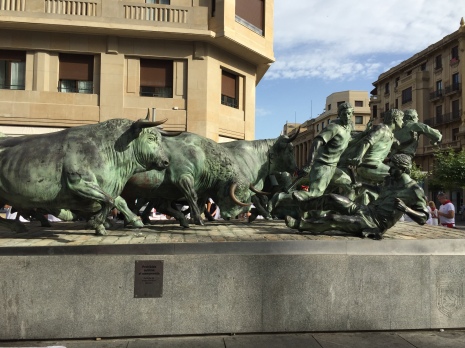 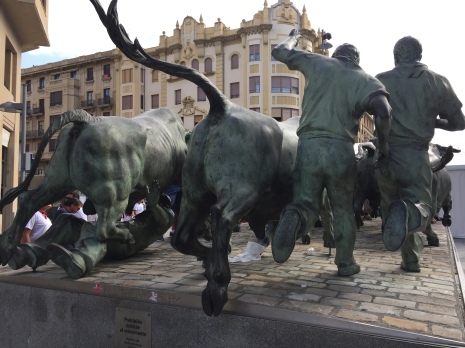 As we were making our way back to our hotel, we happened upon the Comparsa of Giants parade.  This is actually something I was pretty intrigued to see.  All these giants dancing, and what was even more interesting was that we found out what those little things were the kids were getting hit on the head with.  Hah!  I just wish we’d also seen some of the flamenco dancing, too. 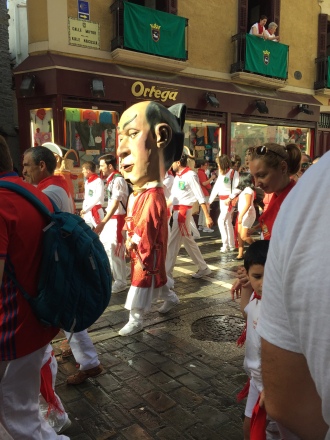 After the parade we made our way back to the hotel, packed up, checked out and started our drive to San Sebastian where we’d do a little walking along the beach and have a tapas lunch.  Honestly, I can’t imagine a better way to spend the afternoon relaxing from a pretty stressful and early morning. 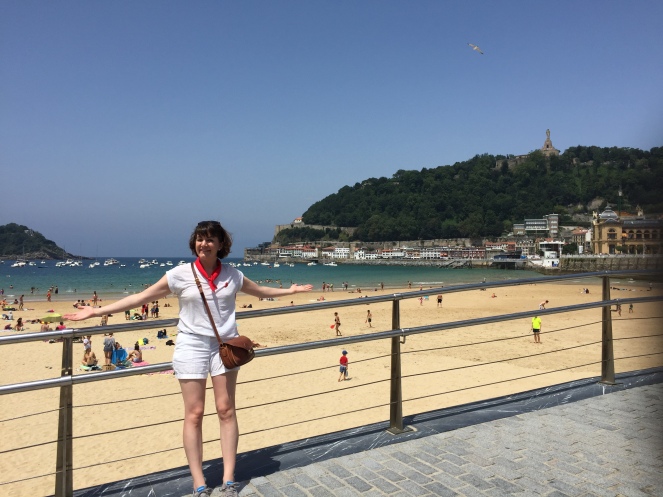 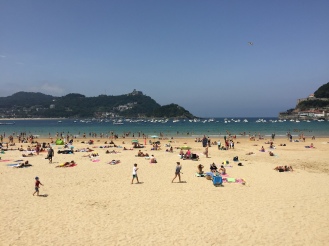 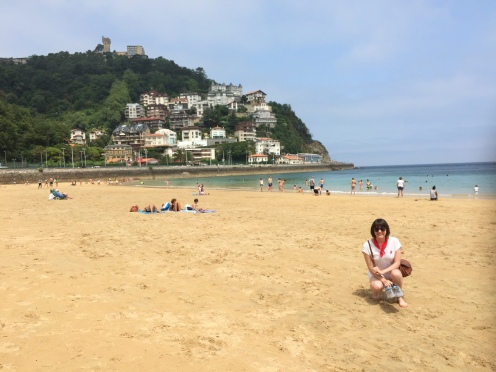 After a long afternoon on the beach, we got back into the car and headed for Toulouse.  I can safely say, I don’t think I would’ve ever gone to Pamplona with out the urging of Michael and Michelle, and I’m so happy we all survived to tell the tale!