During our summer vacation last year, we traveled way north (to Scandinavia – Finland, Sweden, Copenhagen, and Norway) to beat the heat.  This year, I had originally suggested Spain, “Why not embrace the heat this year?” I said to Jim.  After chatting with a few of his coworkers, he decided Spain would be entirely too hot, so we pivoted and Jim suggested Switzerland.  Remembering my own trip to Interlaken with Rebecca back in 2011, I jumped at the chance and was eager to start planning, as I knew Jim would LOVE Switzerland with all the gorgeous scenery, delicious chocolate, and plentiful hikes and outdoor activities.  A huge bonus of going to Switzerland also meant I could plan a trip to (finally) meet up with our fellow ex-pat friends from San Francisco (Genevieve and Jared)!

So, after our first couple of days in Milan & Como, we trained north to Lugano, where we spent a little over two magical days with great friends.

Our adventure started with Genevieve meeting us at the train station then we promptly dropped off our bags at their apartment (which, by the way, has one of THE most amazing views I’ve ever seen from anyone’s apartment…unfortunately I never took a photo of it, and I’m not entirely sure why) and then headed out for some exploring and lunch.

Ever the amazing tour guides, Genevieve and Jared had planned out our entire two days, with our first adventure involving a bus ride up to the top of Monte Brè along with lunch at Restaurant Vetta Monte Brè.  Basically, if you’re looking for an the most impressive bus ride of your life (I’d LOVE to see what sort of test/training they need to undergo to get that job…I imagine it’s the craziest obstacle course you’ve ever seen) followed by a stunning view of Lake Lugano, look no further than here and the food is pretty stellar, too (I had gnocchi and Jim had an out of this world risotto). 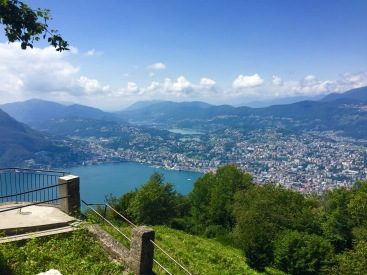 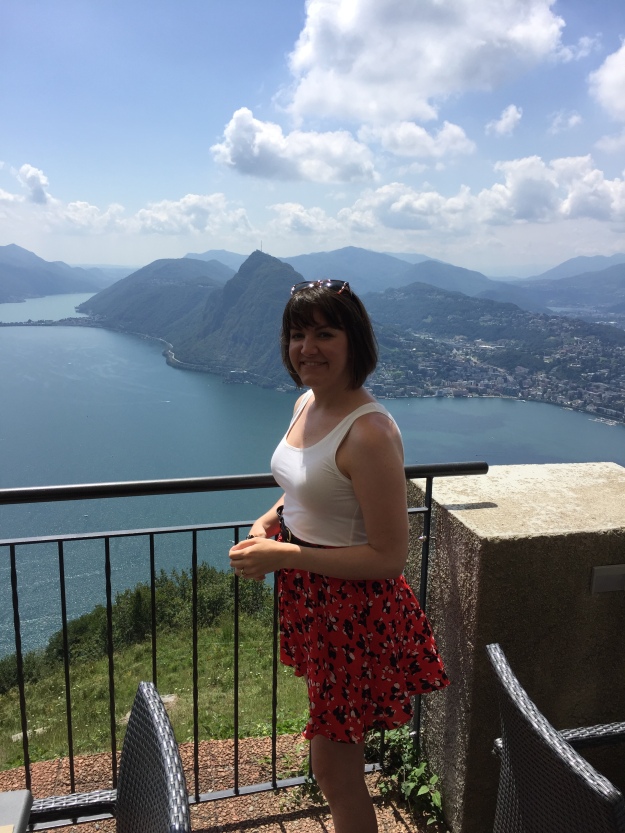 After lunch, we decided to hike down the mountain.  In hindsight, this was a more in-depth hike than I had thought it would be (it’s so easy when you’re going up on a bus).  I was sweating like crazy, but the views were amazing (see below). 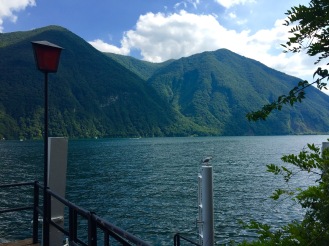 Once we had reached the bottom, we hopped on a ferry back to Lugano.  This, friends, was a welcome breeze after a long, sweaty afternoon.  Upon arriving back in Lugano, we were given a little tour of the downtown and shown their secret passageway (an elevator in a garage), which shortens their trip from the lake back to their apartment (genius find, Jared!) where we got a little cleaned up before dinner.

The plan that evening was dinner at a Grotto, what Genevieve and Jared described as the best/quintessential dinner in the Lugano area.  They decided on Grotto Descanso.  Neither Jim nor I had ever eaten at a grotto and were both pretty unfamiliar with the idea.  Genevieve explained that all of these grottos used to be private wine cellars (I think) that were spots where locals could store their wine and have parties/get-togethers with family/friends.  At some point, these grottos were opened up to the public for dining.

An interesting part of the dinner (and a grotto) is that they’re sort of hidden away inside a mountainside, reachable (often) only by boat.  As such, Genevieve had arranged for us to take a water taxi there and back.  This was my first water taxi experience (Jim’s second).  To say I felt we were traveling in serious style is an understatement.

At the grotto, we enjoyed prosecco as an aperitif (we were celebrating our reunion, after-all) as well as a charcuterie plate before the main dishes.  We’d been told the dish you need to try at any grotto is the polenta.  Jim had his with a stew and I had mine with ribs.  Both were so homey and comfort-y.  It ended up being breezy and a little chilly (a storm was brewing), so the warm food was perfect.  Great experience all around and a fantastic end to our first night in Lugano. 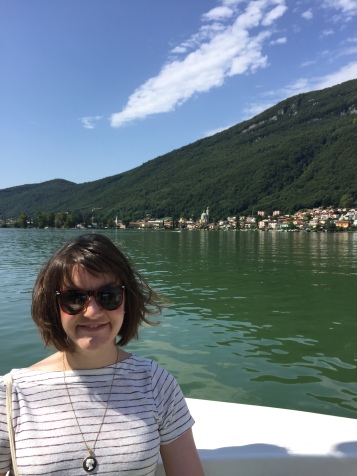 The next morning we woke up and hopped a ferry to Monte Generoso (above).  It was another gorgeous day (albeit hot), and we were excited to see some more amazing views.  We exited the ferry and bought tickets for the funicular (I think they were 50 swiss francs each…both the mountains and prices are steep here in Switzerland), which was a small cog wheel train packed full of folks.

Up at the top we explored around the area and were afforded what I think were even prettier views than what we saw from Monte Brè.  It’s so cool to see the difference in colors of the water on each side of the bridge as well as the lush and yet rocky mountains.  My only regret is that I didn’t get a photo of the four of us together. 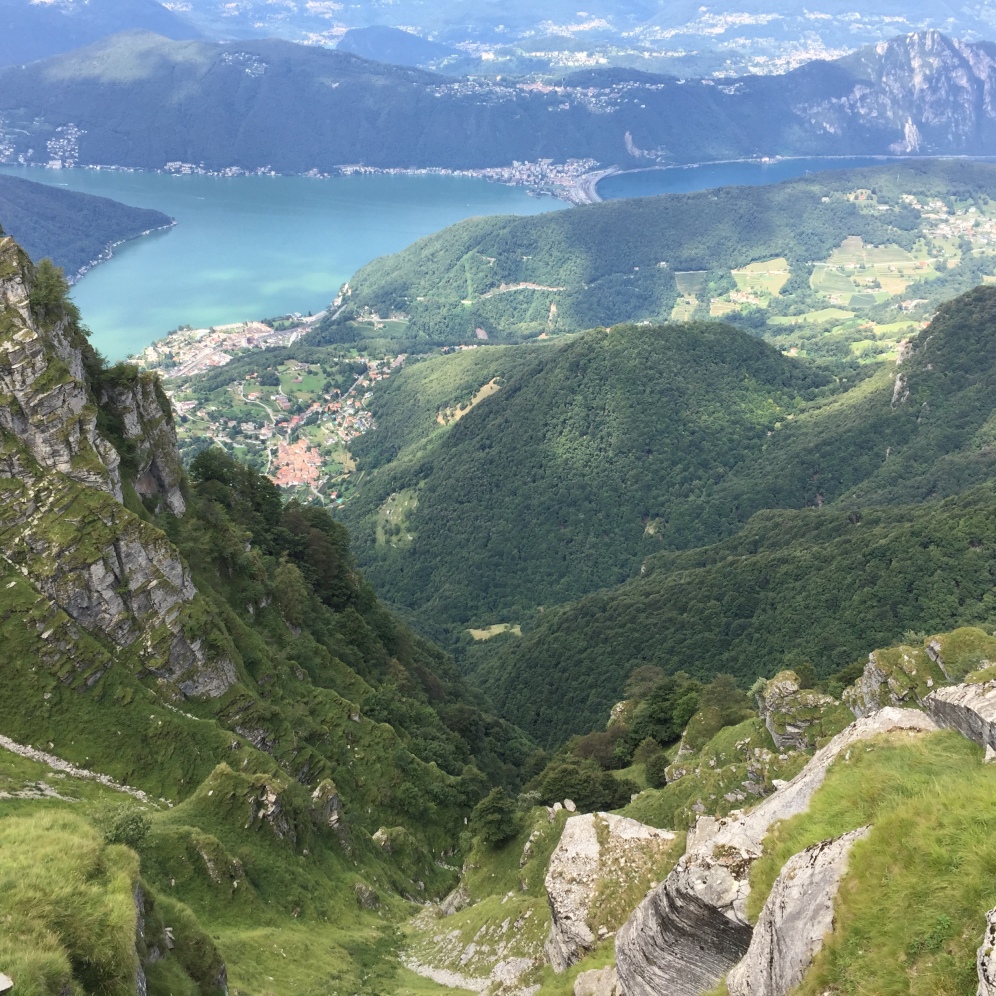 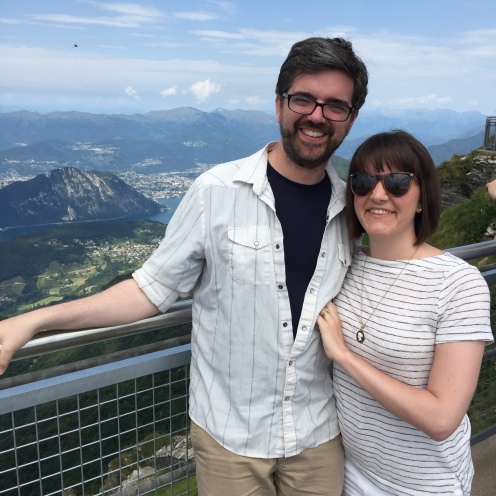 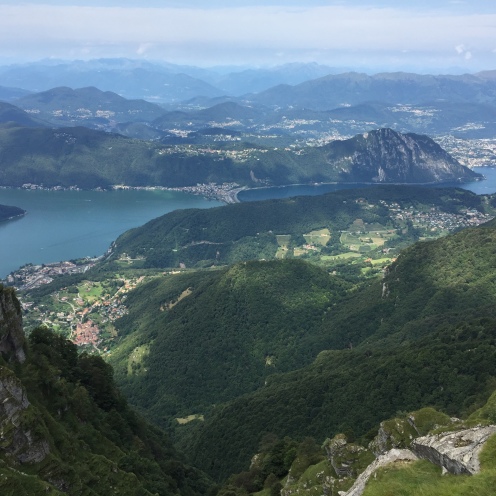 After enjoying the view, we opted for a cafeteria style lunch in the visitor’s center (which was quite tasty) before heading back down to the train station and back to Lugano where we all relaxed before heading out for cocktails later in the afternoon.  In the train station near their apartment, though, we made a quick detour for some amazing Swiss chocolate.  If you’re in Switzerland, you MUST get chocolate from Läderach.  This is my second time (first was in Interlaken with Rebecca) and it’s so creamy and wonderful.  Expensive, but so good.  If you’re on a budget, Genevieve also let us know that Cailler is your best budget bet (it’s also incredibly tasty).

I didn’t mention this earlier, but Genevieve introduced Jim to the Aperol Spritz when we had lunch up on Monte Brè.  Jim was an instant fan.  Me?  Not so much.  My first exposure had been years before in Salzburg with Rebecca…and I remembered not liking it, as it looks like orange soda, but tastes NOTHING like orange soda.  However, we got some pre-dinner drinks at Lido Riva Caccia Snack Bar (which also looks like a phenomenal place to go swimming in the lake), and I caved and decided to give the Spritz another try.  To my surprise, I really enjoyed it.  In fact, I think I’ve ordered it at least six times since we were there not even three weeks ago.  I think it’s the ice and effervescence.  In sum – give it a try. 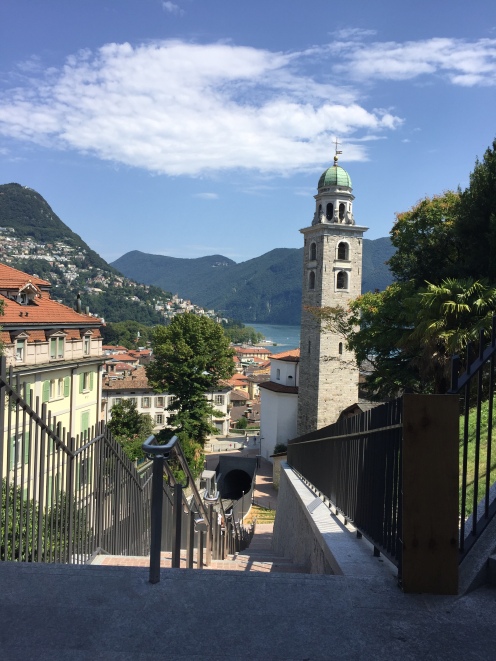 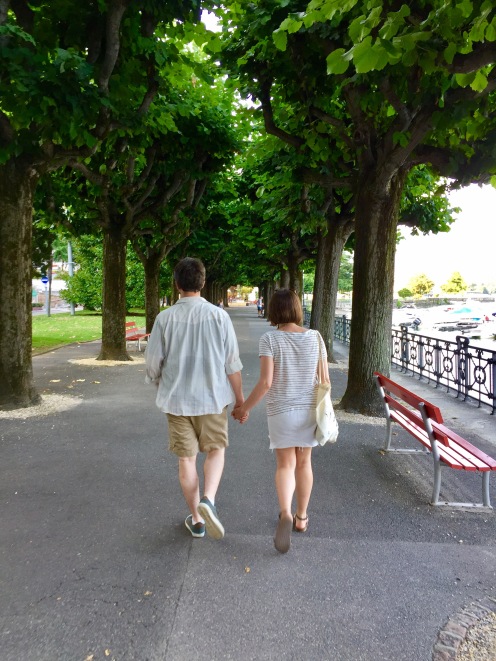 After our cocktails, we made our way to L’Argentino, a pretty great pizza spot in the main square of Lugano.  Should you find yourself there, I highly recommend the MA.CRU.RU pizza.  The mascarpone cheese is so delicious and the arugula keeps it peppery and light.  An extra surprise/joy was meeting up with another friend, Josh, who had just moved to the area from San Francisco, as well.

All in all, it was a lovely start to our tour of southern Switzerland, and we could not have had better hosts, tour guides, or friends to show us their new home.  We miss seeing them every day, but hope this is the first of many get-togethers while we’re both in Europe!