Zermatt was definitely one of the highlights of our summer Switzerland trip, as we were both excited about getting out and hiking around the Matterhorn.  Jim because he loves hikes and me because I loved hiking around Interlaken with Rebecca back in 2011…and if Zermatt was anything like Interlaken, I knew it’d be well worth it.

As such, we said our goodbyes to our gracious Lugano hosts and started our train trip to Zermatt via the tail end of the Glacier Express (which, if you’re game to do it, Genevieve and Jared spoke very highly of it :)).  We handled the remaining portions of our trip with a four day Interrail Pass (similar to the Eurail Pass, but for European residents).  It’s a huge time saver and tremendous convenience (you can hop on ANY train that doesn’t have reservations at any time on your traveling day.  Miss your train?  No big deal, catch the next one.  Feel like sleeping in?  No problem.  You get the idea.).  Our particular train ride took about four or five hours (the longest of our trip) and took us through some really lovely landscapes (see below).  Unfortunately, my photos don’t even come close to capturing how majestic the whole ride really was.  Every time you’d look up there’d be one amazing turn/sight/view after the next.  My one regret is that I didn’t have my camera handy/ready when we went through a tunnel just on the other side of the Andermatt station.  It’s the one you see in a lot of the Glacier Express videos (at the 4:40 mark), and it’s pretty amazing.

All the weather reports had said we’d have rain for the full three days we were in Zermatt, and once we arrived it was pretty cloudy and we had a little bit of a rain shower as we walked from the train station to our hotel; however, I’m happy to report outside of that hour or so, the rest of the day was cloudy, but dry.  After we checked in and dropped off our things, we explored the ski town and decided where we’d start our hike the next morning, buy our provisions, and look for a cuckoo clock (no success).

In the photos below you’ll see the Matterhorn completely covered up by clouds (bottom middle) as well as various shots featuring the Vispa River, which was incredibly high that day as well as incredibly cold.  Just standing next to it felt like air-conditioning (which was quite welcome and lovely, by the way). 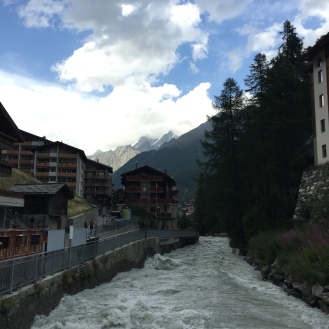 Genevieve and Jared had alerted us that August 1st is Swiss National Day, and our hotel had let us know there’d be a big fireworks show at 10:30pm.  We decided to have a low-key dinner at a pub not far from our hotel and hit the hay early with the hopes of an early rise for our hike.  We lucked out in that our hotel room had two balconies (one on the front and one on the side which ended up providing amazing views of the fireworks show (below).  We laughed that all the fireworks were only red or white (how Swiss), but were most taken by the church bells that started ringing around 10pm.  I don’t know how to describe the bells aside from the fact that they were so loud, so pretty and completely filled the entire valley floor, and they continued for 15 minutes straight before the big fireworks show started.  We stood on our balcony as we saw other families doing the same (some on their roofs) and just enjoyed the sheer beauty of it.  Our conclusion is all fireworks shows should include amazing church bells beforehand.  There’s just something amazing about the loud, constant clanging in such a quiet, peaceful spot. 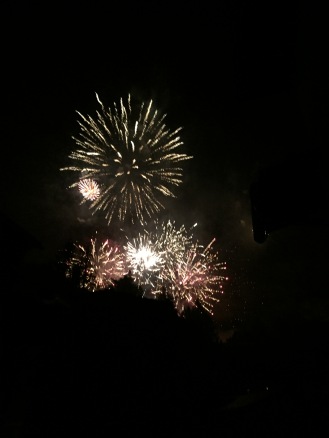 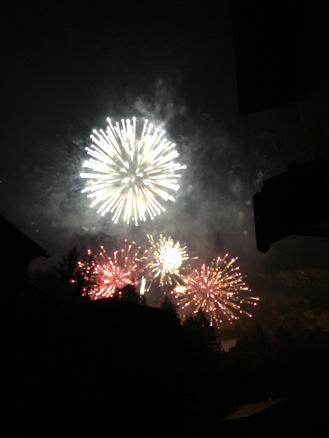 The next morning we woke up early, acquired and packed our provisions and started out for the Matterhorn Trail.  Most hikers take the gondolas up to Schwartzee and then hike down the Matterhorn Trail, but Jim thought that was cheating (and in all fairness, our calves were killing us from our hike down Monte Bre two days earlier), so we hiked up to Schwartzee, instead.  For those interested, it’s a 9.8 km hike that should take about three hours (one way).

On the early stages of our hike we passed maybe four locals with their dogs and only one runner and one couple seemed to be hiking in the same direction with us (we never saw the couple again after Zmutt).

While I complained a little early on, it was really nice to have the entire hike/paths to ourselves.  We were able to stop and take photos or just admire the scenery as we pleased.  Interestingly, we only saw one marmot the whole hike and practically zero other wildlife. 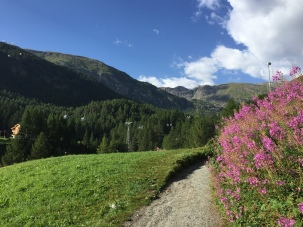 Near Zmutt we came to a dam (photos below) and were taken by the cloudy water as well as the signs posted for the company:  “Hydro-exploitation Plant “.  Hah.  You can’t really tell from the photos, but there are waterfalls EVERYWHERE feeding into this spot, though not directly flowing at that moment.  We were surprised it wasn’t higher, as it had rained the previous day (a hard rain).

Somewhere between Zmutt and Stafel (I think) we came to our first, good views of the Matterhorn.  I think this was one of the most rewarding views of the day, as we’d been hiking straight up for what seemed like at least 30 minutes. 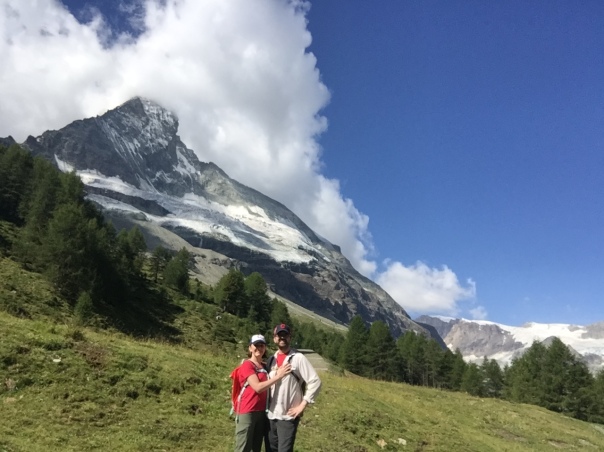 I coaxed Jim into taking a little break by the waterfall and that was the first spot where we saw hikers approaching us from the opposite direction (the gondolas in Schwartzee).  Let me just say none of them were dripping with sweat the way we were.

The remaining hike to Schwartzee included some switchbacks, mini lakes, and general gorgeous and peaceful views.  Up here the wind was whipping, there was distant cowbell clanking, and there were 360 degree views of just stunning scenery.  Almost up to Schwartzee, we stopped for a pretzel & water break to just enjoy the fruits of our sweat.  When we started back on the trail we began to see folks on motorbikes and these oddly motorized bike/segway things.  One was a mother and son.  The son had to have been seven or eight.  He was far ahead of his mom, not even a little bit timid.  When his mom passed us she gave us a smile and let out a squeal.  It was the most perfect combination of sheer terror and delight.

Once we reached Schwartzee we started to see TONS of hikers going in the opposite direction.  I admit, I didn’t feel like they’d earned it, but I didn’t care as I got to eat my salami sandwich, pretzels, apple, and a little chocolate while admiring an amazing view of the Matterhorn. 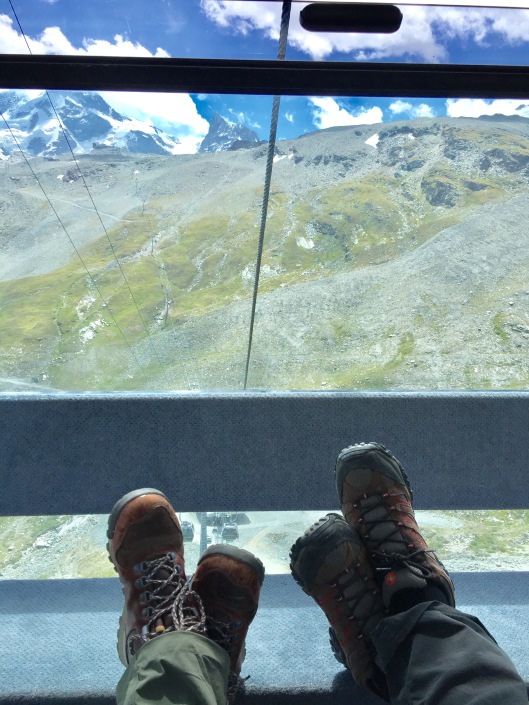 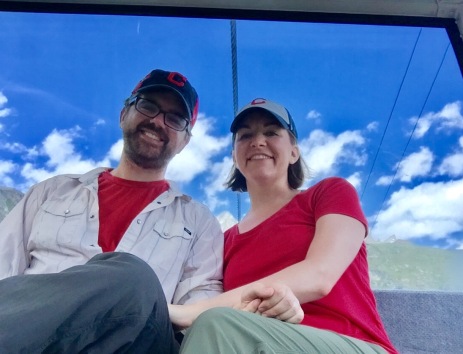 On our hike up, we’d talked about potentially hiking further (or back down) instead of taking a gondola, but after lunch we were 100 percent on the same page that we would take the gondola everywhere else we went that day.  It was a great idea.

We bought an all-day gondola pass (which is expensive, but I think worth it and maybe the best idea if you don’t want to do any hardcore hiking but would like to see all the sights), which you could use to get nearly everywhere along the mountain.  They were incredibly posh, afforded amazing views, and were just fun.

We took our first gondola ride from Schwartzee up to Gandeghutte (below) where we then switched to another gondola to take us up to the Matterhorn Glacier Paradise. 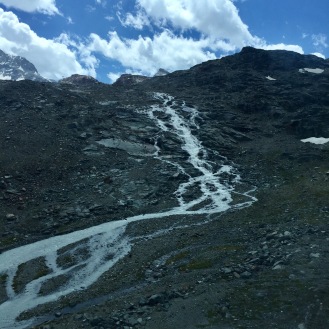 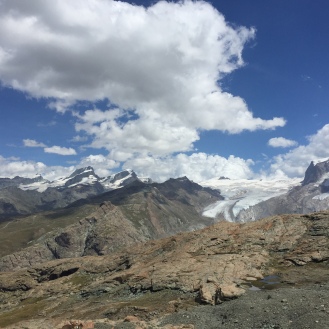 This is a lovely ride and amazing view of the glacier.  If you’re going, be prepared for some serious winds (we saw many a hat graveyard up there) and pack a jacket (I’m lucky as Jim let me wear his).

The photos below are of us up on the viewing platform of the Matterhorn Glacier Paradise.  The funny part is I didn’t realize there was still a view of the Matterhorn (not in any of the photos I took of Jim or the one of the two of us, but it IS pictured in the photos Jim took of me).  There’s something wild about being in 80 degree weather in the morning and walking around a glacier hours later.  Can’t recommend doing this enough. 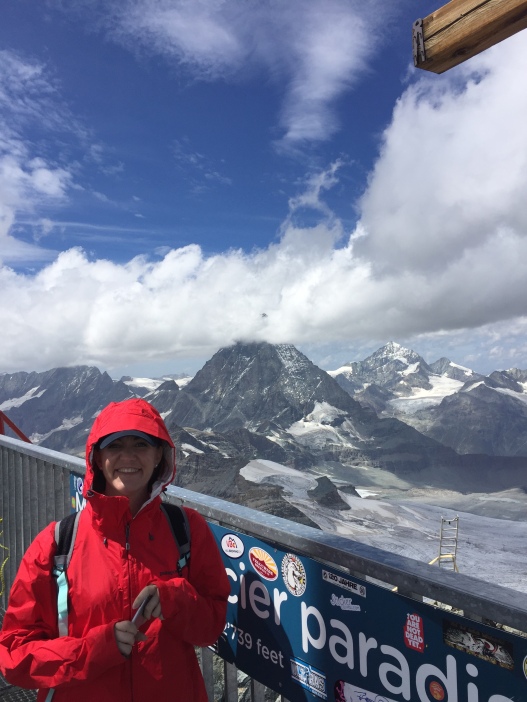 From the Glacier Paradise we had initially planned to take a gondola down to Furi, but it was closed for construction (by the way, cranes are EVERYWHERE all over Switzerland.  They are busy building, building, building…).  So, we took the Schwartzee gondola back to Zermatt.  It was amazing how fast we flew over the terrain we hiked up only hours before.  It was really gorgeous and clear. 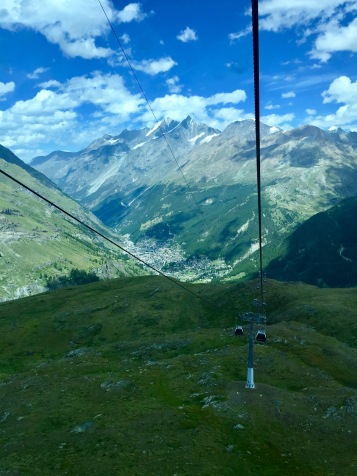 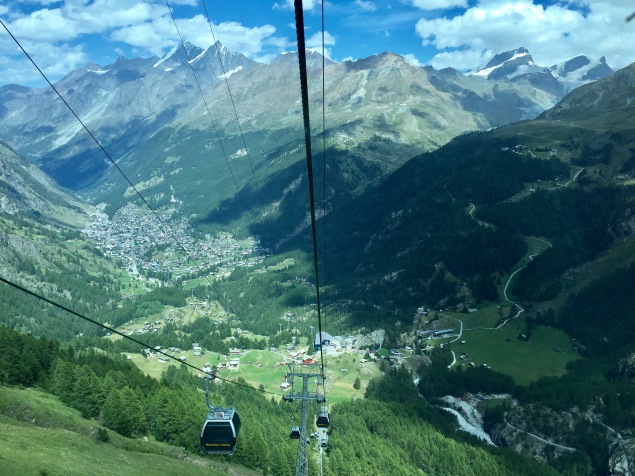 The next morning, we had plans to eat lunch at Chez Vrony, the #1 restaurant in Zermatt (I didn’t realize when I booked it a few months earlier), which was a short hike from the Sunnegga funicular.

Here we walked to a new spot, which was essentially a tube up a mountain.  Talk about amazing air-conditioning, that entire building was chilly (could’ve used that elsewhere on the trip), which was cold but also felt nice.  After a quick ride up, we got off at Sunnegga and enjoyed the lounging benches and yet another Matterhorn view before our lunch reservation.

The website said it was a 10 minute walk (it’s more like 25) down into the valley.  If you go to Zermatt, eat at Chez Vrony.  It’s only open for breakfast and lunch (I imagine because they have private parties all the time in the evening), and it will be THE BEST MEAL with the best view you’ll have maybe ever.  Just look at that view below.  It’s stunning.  Plus the owners are also delightful/incredibly welcoming.

I was also excited to finally see some Edelweiss (in the foreground of the Matterhorn photo above).  It was much softer than I thought it would be (feels kinda fuzzy), even though it is described as “soft and white.”  We ordered a salumi platter (imagine munching on this guy after a hike) where my favorite was the dark sausage next to the pieces that look like bacon (Jim said I prefer everything that tastes game-y) with some Zermatt beers (which were billed as local and unfiltered…yum).  For our entrees we ordered their ravioli as well as a lamb dish.  I have no words to describe how tasty this was.  So tasty that we ended up having some dessert featuring mountain berries and a saffron sauce (yum again).

I loved everything about this lunch until we had to climb back up some steep hills to get to Sunnegga to take the funicular back down to Zermatt.  Then it felt like a horrific mistake (but not really, it was wonderful).

After lunch we made our way back to our hotel to pick up our bags then made our way to the train station for our next destination – Sion (Swiss Pinot Noir country).

Zermatt was so special and so beautiful.  If I was planning this trip all over, I think I would’ve had us stay in Zermatt for at least four days, and we would’ve gone hiking at least three of those days exploring more and more of the mountains and (of course) trying to eat at Chez Vrony as often as possible!