After hiking back from our lunch at Chez Vrony in Zermatt, we hopped on another train and started our journey north and west toward Switzerland’s Pinor Noir region – Sierre and Sion and then onward toward the Lavaux wine region (Chablis).

This might’ve been some of the prettiest portions of our train rides as the landscape changed so quickly from the Alpine views in Zermatt to the terraced vineyards in Sierre and Sion.  If we’d had more time, we would’ve stopped in Marigny, as well (Jim really wanted to go hiking with St. Bernards).  Please excuse the glare on the photos below, it was incredibly sunny as I tried to capture some photos inside our train car. 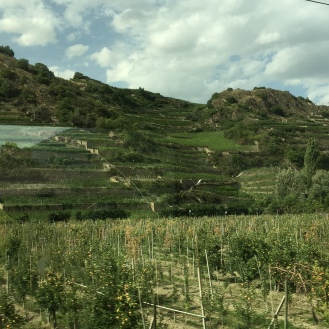 I had originally planned for us to do some wine tasting/pairings, but we arrived mid-week, and most places were only open on the weekend or seemed to be closed for an August holiday.  With that said, we planned to arrive in Sion later in the day (around 5pm) and have dinner at our hotel – La Grande Maison.

We took a local bus from the train station to our hotel (which was about 16 euros for two people, but it had wifi AND air-conditioning…Swiss public transportation is expensive, but really nice), arriving at our hotel a few hours before our dinner reservation at 8pm.  This was probably THE hottest day of our vacation (which is saying a lot…we had some real scorchers), and our hotel room was facing the afternoon sun without air-conditioning (and we don’t have AC here in Toulouse, but not even a fan).  I will say; however, there were amazing views while we were on the bus as well as from the terrace at our hotel. 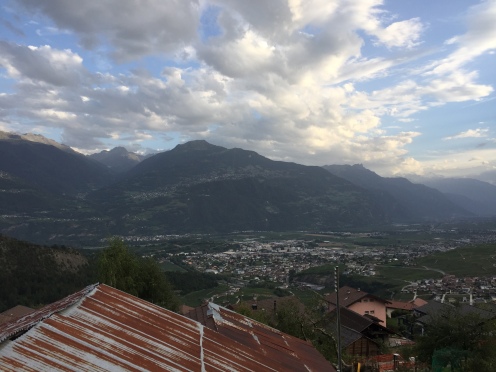 We opted to take a nap and get cleaned up before dinner.  The dinner was alfresco and quite tasty.  I think we were most excited to share a bottle of some local pinot noir along with some gazpacho (which neither of us ever eat) and fish dishes, ending with some lemon sorbet.

We woke up the next morning and decided to make our way to Vevey/Cully for some hiking/exploring.  On our ride back to the train station we saw two gorgeous castles and another couple who was also staying at our hotel (they arrived and departed the same time as us) got off (I think to tour one of those).  In hindsight, it might’ve been a better idea to stay in a hotel closer to downtown and check out the castle.  But, even seeing it up on the hill in the center of the city was pretty amazing.

The train ride from Sion to Vevey was maybe an hour (might’ve been less).  We had dressed in our hiking gear, as we had decided we’d leave our luggage in a storage locker at the Vevey train station and head directly for Mont Pelerin.  This time, we had decided to take the Golden Pass funicular up to the top & back down, but we would hike to the Ascenseur Plein Ciel for some 360 views.

The day was a little cooler/breezier than it had been in Sion, but still quite warm and in near direct sunlight.  After a 20 minute walk from the train station we reached the base of the funicular.  If you are going here in the summer please know this funicular is essentially a hot box from hell.  There are no windows that open and it is a furnace inside.  I’m not sure I’ve ever produced that much sweat in that short a time frame in my life.  The view going up, however, is really quite beautiful.  You’re traveling through so many different vistas and landscapes, ending up with some amazing lake views (above).

What we thought was fascinating was how much broad, flat farmland there was once we were up on the terraces at the top.  In many ways the landscape looked more like something you’d expect to see in Ohio or Kentucky, not up a huge mountain with a cliff that drops off into a lake.

The hike to the Ascenseur Plein Ciel was a little over an hour with relatively easy grades where you were hiking along a sidewalk or on the road itself.  It was definitely cooler and breezier up there and we were (for the most part) the only hikers on the road and I’d wager only 5-10 cars passed us the entire way.  It was peaceful and gorgeous while the grassy plains were totally unexpected. 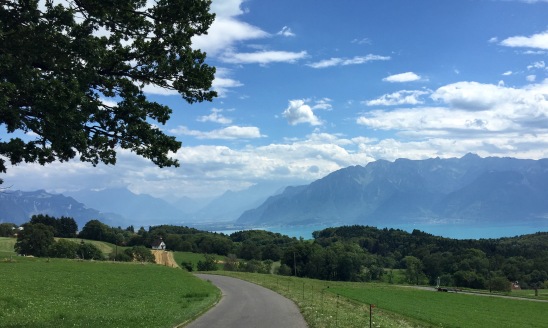 Once we made our way to the elevator, we stopped for a little picnic break of water, pretzels, and apples (we’d had a late breakfast already), then paid our way to head up for the views.  We thought it might be more crowded, but it was pretty desolate, as there aren’t even employees working at the elevator (it’s all automated through coins), and there was only one other person on the platform the same time as us.  If you love views and hate lines or crowds, this is the place for you.

The hike back to the funicular felt faster than the way up (it also felt cooler, though I’m not sure if it was).  The hot box was still hot, but now I was telling Jim we could go for a swim once we got to our hotel in Cully (we did not have a pool at that hotel…I must have been hoping and dreaming there was a pool).

We arrived in Cully close to 6 or 7pm, checked into our hotel and took some very much needed showers and Jim found a REALLY tasty restaurant in the center of Cully called, Le Bistrot Chameleon.  We decided to walk along the lake to get there, which was gorgeous and lined with sunbathers, swimmers, families, people having picnics and listening to music.  It looked like an ideal spot to spend the summer and cool off in the lake. 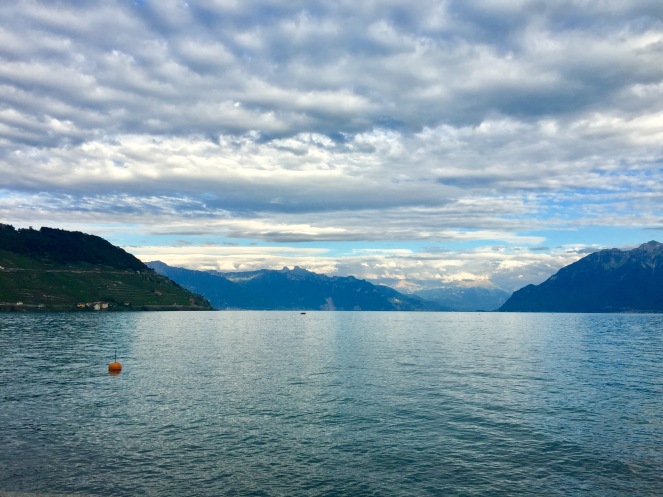 Once the sun had gone down, a light breeze rolled in and we dined outside, which was quite perfect.  Le Bistrot Chameleon was incredibly tasty.  We split a bottle of local white wine, and I had a trio of fish as my starter (so good) and a fish with a pineapple/pomegranate salsa that was so fresh and light – it was what I want to eat every time it’s hot outside.  Similar to the night before, we ended with some lemon sorbet and then some moonlight strolls along the lake.

The next morning we woke up ready to head south and west toward Geneva, but only after enjoying breakfast and the terrace at our hotel.  Check out that view of the vineyards.  There were miles of nothing but that…truly unlike anything I had ever seen before. 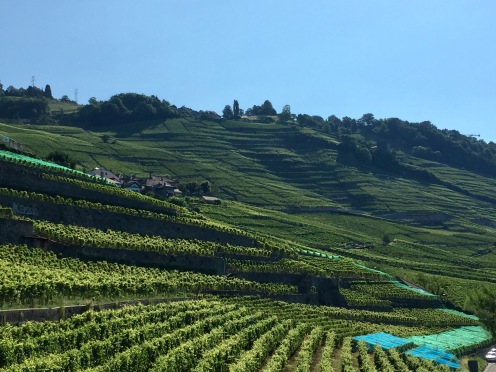 This middle leg of our trip was a slower pace, but just what we needed.  Next was Geneva, then back home.