In 1895, Arnold Hills and Dave Taylor of the Thames Ironworks and Shipbuilding Company, Ltd. started a team, the Thames Ironworks Football Club.  Five years later, they changed their name to West Ham United.  117 years after that, Victoria and I attended our first English Premier League football game.

I’ve been interested in seeing a live EPL game since stumbling across the Men in Blazers podcast.  They spend some of their time recapping the events of the game (who won, who scored the goals, who is where in the standings), but spend most of the podcast discussing the “narrative” of the game.  The best narratives tend to involve weird player haircuts, manager wardrobes, meat pies, and singing songs.  All of these things were on full display as West Ham United hosted Tottenham Hotspur in London Stadium.  The game was a local rivalry.  The two teams home stadia are separated by six miles of street markets and 12 places in the league standings.

We arrived at London Stadium about 90 minutes before kickoff to check out the pregame scene.  London Stadium was originally built for the 2012 Olympics, and re-purposed as the home ground for West Ham United last year.  It is an odd pairing, a 117 year-old Football team playing in a modern track & field stadium, but the club does its best to make it feel like home.

Outside the stadium, food trucks set up selling meat pies, hamburgers, and waffles.  Video teams set up to tape fans giving their pre-game predictions (of West Ham winning by either one or two goals), followed by the customary cheer “Come on you Irons!”.  These are showed on the screens inside the stadium about an hour later.

Inside the stadium were more vendors selling sausages, beer, and more meat pies.  We were also particularly struck by how many restrooms were in this stadium.  It doesn’t make for a particularly charming concourse, but the utilitarian nature seemed to fit the team.  This is a place to eat a sausage, drink a beer, and use the bathroom.  Check, check, and check.  Time to go watch a soccer game.

Inside the stadium, we were expecting a healthy mix of West Ham and Tottenham fans, given the proximity of the teams and the relative ease in which we could buy tickets.  This, however, was not at all the case.  All of the Tottenham fans were located in designated corrals in one corner of the stadium.  I’ve seen designated areas for “away” fans at other sporting events before, but this event called for a level or security that I had not seen before.  It was not enough to give Tottenham fans their own section, but to isolate that section by 40 feet of unused, covered seats.  Then to guard that section with two rows of uniformed security guards positioned every two rows.  It seemed a bit excessive, until the game kicked-off and Tottenham started scoring goals.  Then I wondered if there were enough guards. 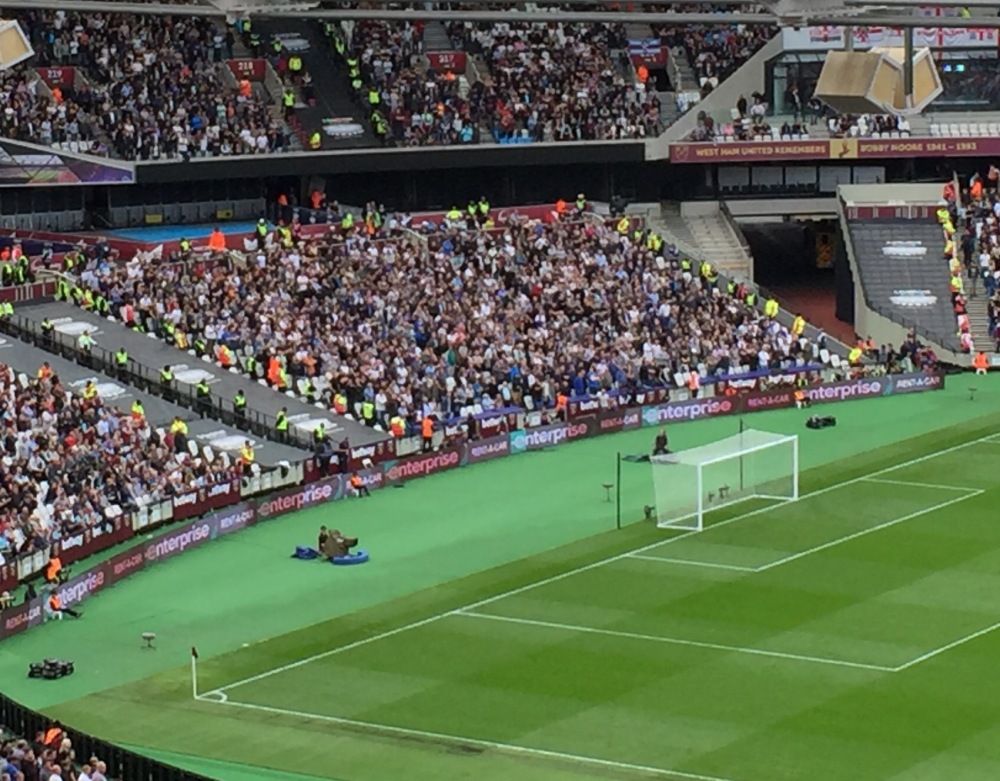 A long team history leads to some interesting traditions, and our favorite by far was the official team song of West Ham United.  I’m used to college fight songs being played at sporting events, punctuated by drums and horns and lyrics about driving down the field, shaking down thunder, and generally winning whatever contest is about to begin.  West Ham United have developed a different tradition.  Before every game (and at the beginning of the second half), all of the home fans stand, several automatic bubble machines start spewing a stream of soap bubbles, and 60,000 people sing “I’m Forever Blowing Bubbles.” 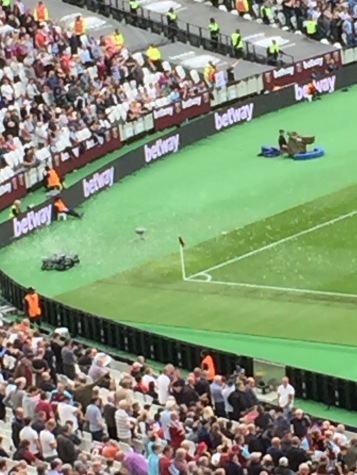 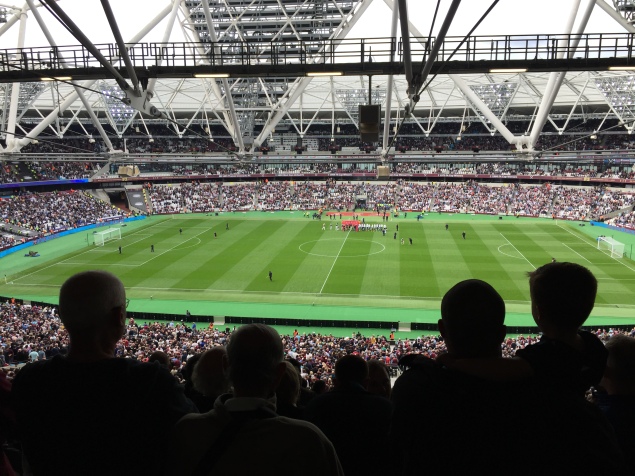 This is not an anthem of victory, achievement, strength, or even soccer.  West Ham fans mark the start of the game with a song about the fleeting nature of happiness, the underlying sadness of an unfulfilled life, and their own false hopes.  But the most amazing part is that, after singing this song (twice), the home fans really do seem fired up to watch the game. 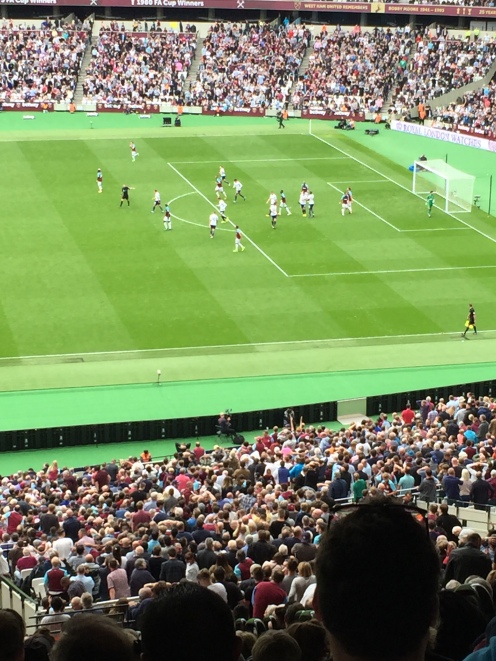 In the end, it was a closer game than it seemed on paper.  Tottenham ran out to an early lead and seemed to be cruising, 3-0, in the second half.  Then, they had a player sent off on a red card.  West Ham made some smart substitutions (this guy should’ve started – as he was THE game changer – Cheikhou Kouyaté), scored two goals to make it 3-2, and had a few close, desperate chances at the end that almost tied the match.  In the end, the home team ran out of time, the away favorites won, and everyone shuffled out.  If you’re interested in watching a quick video for the feel of the game, this one is pretty great.

Final Tally of the Experience:

On-Field Fights (scuffle above…went on for a long time): 2

# of Times Bubbles Dispensed on Field:  4 (beginning of each half & for each goal)

Excited, Encouraging Screams of “Come on you Irons” : 10