Tuesdays are typically my market days.  More specifically, they are the days when I get my Marché Victor Hugo fix.  I know I wax on and on about this market, but I live for these weekly (sometimes bi-weekly or tri-weekly) trips.  It sounds a little strange, but I feel like I’ve built up a little community there and everyone loves food as much as I do (maybe a little more).  As an ex-pat, that kind of feeling is golden as well as important.

I’ve zeroed in on my favorite stalls and am a regular at all of them.  After we’d been in Toulouse for maybe six months or so, all of the vendors recognized me, and I felt like I was getting special treatment as a result (a little gratis this or that, waiting on me, first, selecting the perfect cut of meat or fish, etc.).  Not surprisingly, this only enhanced my experience and desire to return/only shop there.  Jim says it’s because they now know I’m a sure thing (i.e. I’m not a tourist – I’m there to buy, and I’ll be back), but I’ve always preferred to think it’s because I’m embracing the French food culture, while in reality it’s probably hard NOT to recognize the petite brunette who speaks in elementary French with copious enthusiasm and always pays in cash, often with exact change.  I probably stick out like a sore thumb as that funny American who visits more than any other customer.

First I won over my bakery.  I’ve tried every bread they make (and most of their pastries), settling on my favorites.  Now they know what I’m going to order as soon as I approach (usually it’s a baguette, pave aveyronnaise, and tresse au sucre…but sometimes I change it up and order something else and they laugh) and hide the total on the cash register so I practice my French (they love it when I give them exact change based on what they say).  They even recognize Jim, as once they asked him if I was sick or at home in bed.

Then I won over my fruit/vegetable guy (he’s my absolute favorite).  He’ll chat with me about vacation plans, the weather, foods to prepare together, alert me to what I should/should not be eating (he loves to give me things that I SHOULD have selected).  Even better, he’ll help me pick out various types of produce (I once put some endive in my basked and he immediately told me, “No, no, no!” that he had better ones in the truck and got some out for me) or won’t let me buy something if he says it’s not very good that day, he’ll even re-select my tomatoes or peaches.  Jim also jokes that if we go on a weekend when it’s busy, he’ll just sight weigh my goods.  He’s introduced me to so many tasty foods that I’d never tried before:  fresh apricots, figs, dates, golden kiwis, passion fruit, French melon, crazy mushrooms, etc.

I had a fish stall, but each stall I choose ends up closing.  Now I’ve been going to the new, giant one for a few weeks and the gentleman now has figured out he can practice his English with me (there’s actually a lot who love to do this, though I try to respond only in French).

Then there’s the large chicken/foul stall (Maison Samaran).  This is the spot where I bought our turkeys for Thanksgiving last year and often our chicken.  You might remember I decided I’d start buying rabbit to cook at home (great recipe here), which I bought from there, too.  The rabbit purchase is when I won over Maison Samaran.  Now they know me.  I’ve even won over the employee who often teases me about my French.  I saw him on the street the other day and he gave me a big smile and we chatted for a minute.

There’s also a large pork stall, Maison Garcia.  There are two men who work there that definitely recognize me.  The other day a woman working (who picks out a mean pork chop) asked me if I needed a bag and my favorite guy responded (in French) that I always have my own bag.  I pulled my own up and gave a smile.

Which brings me to my butcher.  He sells beef and veal, and is one of the smaller butcher stalls.  I’m not entirely sure how I decided on him.  Maybe because there wasn’t a line, maybe because he looked nice.  His name is Antonio, and I’ve deduced he is the favorite butcher of many of the employees in the market.  I often buy a cut of entrecôte from him and occasionally buy some ground beef for hamburgers (I think both make the best steak and burgers we’ve had here in Toulouse).  This past Tuesday was no different.  I had ordered entrecôte pour trois personnes (that way you get a thicker rib eye, as he slices it off of the GIANT portion of cow).  While he was cleaning it up I noticed, “épaule d’agneau” in front of the register.  I’d never seen lamb in his stall before or at least not that I’d noticed.  My mind immediately went to the delicious meal I had with Michael and Michelle in Pamplona.  I thought to myself, I should try to make that at home.  While I was contemplating, Antonio asked if I wanted anything else, I said I did not, thanked him, paid, told him I’d see him soon, and walked away.  I made a loop around the market and decided I wanted to buy the shoulder of lamb.  So, I approached his stall again (he was butchering THE largest hunk of meat I’d ever seen).  And this, friends, is when I won over Antonio.

We both laughed as I had returned so soon, and I explained I’d like the shoulder of lamb.  I kid you not, he was SO excited (so much so, that I wondered if this was his first day of selling lamb and it’s a new meat venture for him, and he was so excited that on day one he already had a lamb customer).  With a smile on his face and twinkle in his eye, he happily took the shoulder out of the case and asked me how I’d like him to prepare it.  I smiled and slowly said, “Je ne sais pas.  C’est la premiere fois que je cuisine un épaule d’agneau.”  Somehow his smile grew larger and then he started saying about 9 million things in French.  My eyes got big and I swear my ears got bigger, too, as I tried to translate what he was saying.  That’s when I realized he was giving me some options – aha!  So I responded, “Je ne sais pas.  Que recommandez-vous?”  Then he started talking about roasting it and I immediately said, “Oui, oui!  J’adore les viandes rôties!”  He smiled and started to butcher the meat then came back and made sort of a hand motion like he was going to give me some insider tips.  This is when he showed me that he’d cut the leg (I presume so it could fit easier into a dish) and some flaps around the largest bone I’ve ever seen in any cut of meat (see photos below).  I gave a huge smile and nod of my head, “Merci monsieur!”  Then he continued and started to rattle off various recipes.  He told me to cover it in oil, salt, and garlic and cook it in the oven for 50 minutes (I know this, as I repeated it back to him).  Then he smiled a huge smile again and said (in French) essentially, “Or, you can look up a recipe on line.”  He motioned that he was typing as he said this.  We both laughed.  I thanked him a million times and walked away feeling like a million bucks and excited to get roasting. 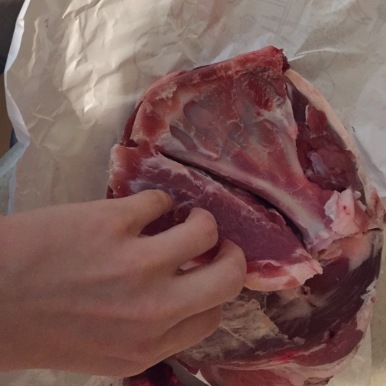 Once home, I started to consult various online recipes, starting first with our Meat Cookbook from America’s Test Kitchen (which is pretty outstanding if you don’t already own it).  Unfortunately, it didn’t really have any lamb shoulder recipes (only chops).  This is when I started to think lamb shoulder might not be too American and instead might be super French – hence Antonio’s excitement in my selection.

So I typed, “roasted lamb shoulder” into Google.  The first three results were all for the same recipe, which belongs to Jamie Oliver.  I figured top billing across multiple blogs must be pretty good (it is), so I set out to purchase all elements necessary for our lamb feast (read:  fresh rosemary) and opted to finish off the dish with some brussels sprouts I’d picked up earlier that day and some savory Rosemary biscuits.

I followed the recipe (sans the sauce) and found it was ready to eat after three hours in the oven and was incredibly tender (very fall off the bone).  The rosemary & garlic flavors really came through and were quite the tasty accompaniment to the sprouts & biscuits.  Jim and I decided this could EASILY be a new Sunday night dinner or even a great dish for Wednesday nights with friends. 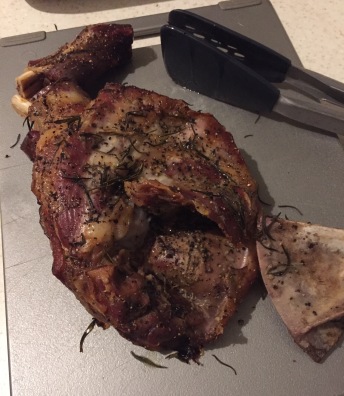 If you like brussels sprouts (or don’t), I also highly recommend this method.  The first time I had them cooked this way was at Audrey Claire in Philadelphia (I’d never had brussels sprouts before) and was in love.  A few times eating there I sat at the bar with a clear view of how they make them, and I’ve been making them at home ever since.  All you need to do is clean them up, slice them in half, drop some butter into a nonstick skillet (and season with salt & pepper) and place all of the brussels sprouts cut side down and let them cook until they’re golden brown (no flipping, no moving…just let them cook).  Once ready, shave fresh parmesan cheese on top.  You’ll be in love, I promise.

If you like no-fuss lamb, I cannot recommend this to you enough.  What’s more, I can’t wait to go back to the market and tell Antonio just how much I LOVED the lamb.  In fact, I might just have to ask him what other cuts of meats I should be buying.

People often ask what I’ll miss when we move back to the states, and I can easily say I’m going to desperately miss Marché Victor Hugo for all of the reasons above.  Now to just improve my French so I can – really – talk about recipe options with my friends at the markets.  I’m so excited about what we’ll be able to cook next!